Court: Medical marijuana patients should get pot back from cops 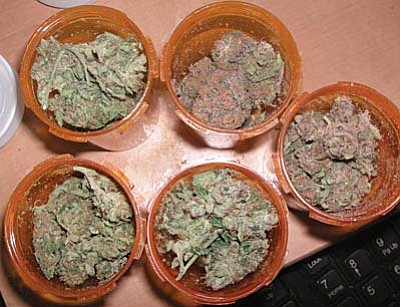 They've got to give it back if you've got a medical marijuana card -- even one from another state.

Without comment the U.S. Supreme Court on Monday refused to disturb state court rulings that said medical marijuana patients whose drugs are taken by police are entitled to get them back.

Monday's order most immediately affects Valerie Okun, whose drugs were taken at a Border Patrol checkpoint on Interstate 8 near Yuma in 2011. While she was never prosecuted -- she has a valid medical marijuana card from California -- sheriff's deputies refused to return the drugs.

The order should finally put the issue to rest. Until now, Yuma County Sheriff Leon Wilmot refused to hand over the marijuana despite contrary rulings from the Arizona Court of Appeals and Arizona Supreme Court.

But Alfonso Zavala, a spokesman for Wilmot, said Monday that his boss is consulting with the county attorney's office before deciding what to do next.

More significant, Monday's order from the nation's high court cements into law that precedent for all of the state's more than 43,000 medical marijuana users and more than 500 people who are not users but serve as caregivers.

By simply upholding those ruling, the U.S. Supreme Court declined to look at the obvious conflict between laws in places like Arizona, where at least some individuals can buy and have marijuana, and federal statutes that consider possession by anyone other than authorized researchers a felony -- potentially leading to a definitive ruling on whether states have the right to enact their own pot laws.

"To me, that is the elephant in the room,' she said Monday.

Polk said police are required to follow not only state but also federal law. And the same, she said, is true for prosecutors and judges.

She said that the Supreme Court needs to deal with the issue of federal preemption head-on, if not in this case than in some other litigation from another state.

In Okun's case, the border Patrol turned over her marijuana and hashish to county officials. But charges against her were dropped because she is enrolled in California's Medical Marijuana Program, which Arizona recognizes.

The Yuma County Sheriff's Department, however, refused her request to return her marijuana.

Attorneys for the sheriff argued that Arizona law requires any marijuana seized in connection with a drug offense be forfeited to the state and that the sheriff would be violating federal law by giving the drug to someone else -- positions state courts have rejected.

Wilmot had another concern: being prosecuted under federal law for giving out an illegal drug.

But in its ruling last year, the state Court of Appeals said that fear is without merit.

"The sheriff is immune from prosecution under federal law for acts taken in compliance with a court order," wrote Judge Diane Johnsen for the court.

Cops take your medical marijuana? Tell 'em to give it back
Court rules cops obligated to give marijuana back to woman
Court rules federal law has no bearing on zoning for marijuana dispensaries
State prosecutors give up on effort to regulate labeling of marijuana products
Court commissioner wants deputies to return medical marijuana to woman in California