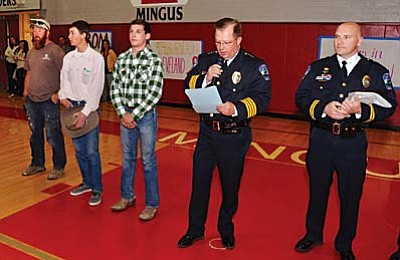 Cottonwood Police Chief Jody Fanning, accompanied by fellow police officers, awarded Mingus High School students Jerry Vojnic and Christian Despain, along with Phillip Cromer, the police Medal of Valor award at a Student Leadership assembly held on Friday, April 4, at Mingus Union High School. On March 17, the trio rescued an unconscious driver from a vehicle that had run off the road near the high school and had caught fire. Without the quick action of Vojnic, Despain (who suffered a burn during the rescue) and Cromer, Fanning said it was quite likely that the "outcome could have been very serious or fatal" for the young driver. The police Medal of Valor is the highest award granted by the Cottonwood Police Department. Police Chief Jody Fanning, Jerry Vojnic, Officer Kiedi Dever (first CPD officer to arrive at the scene of the accident), Christian Despain and Phillip Cromer at the Medal of Valor award ceremony on Friday at MUHS. VVN/Jon Pelletier