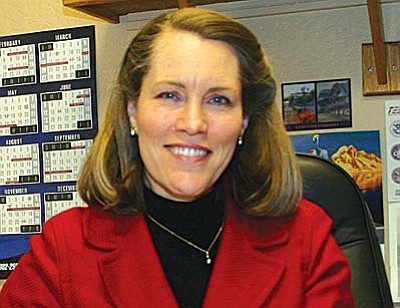 Clarkdale Economic Development Director Jodie Filardo: “State Route 260 may be the first time that we have an opportunity to figure out how (SB) 1402 and those opportunities will actually get implemented,”

Stalled efforts to bring broadband to the Verde Valley may be picking up steam in the coming weeks as economic development leaders bring together vendors who can help finance this expensive project.

Rural communities in Arizona have lagged behind Phoenix and Tucson in delivering high-speed broadband connectivity to its residents, mostly due to the enormous cost of laying cable underground, said Clarkdale economic development director Jodi Filardo.

"Broadband has really started to be used as this overarching, umbrella term," Filardo said. "Because we have so many choices in devices today, the providers for broadband know the demand for speed is going to go up, up, up."

The process last saw progress between 2009 and 2012, she said, when members of the Verde Valley Regional Economic Organization joined a statewide effort to treat broadband like any other utility.

Through the passage of Senate Bill 1402 in 2012, the Arizona Department of Transportation can now work with vendors and providers of broadband services to lay cable while construction projects are already underway.

Under SB 1402, ADOT does not shoulder the cost of laying conduit or fiber. Rather, private companies are permitted to piggy-back on these road projects to help stymie the already high cost of installing broadband.

"State Route 260 may be the first time that we have an opportunity to figure out how (SB) 1402 and those opportunities will actually get implemented," Filardo said.

By the time SR 260 is being torn up for widening, possibly in 2016, Verde Valley economic leaders, like Filardo and her Camp Verde counterpart Steve Ayers, hope providers will be laying conduit and maybe even fiber cable.

"In this world we live in today, broadband connection, or high-speed internet, is as valuable a piece of infrastructure as sewer, water or good roads," Ayers said.

Filardo said the Verde Valley is currently served by companies who are prepared to handle an average number of daily users.

When there are less people accessing their internet, nothing changes, but when usage peaks, like on Monday mornings as people get into the office and check their email all at once, service suffers.

Filardo said this is what can keep companies and individuals, like movie-makers to architects, from coming to the Verde Valley, and prompts groups such as Yavapai College and Verde Valley Medical Center to independently finance and provide for their needs.

"Simplistically, that's the idea, things get jammed up," she said. "You can run into problems if you don't have big enough utility-grade broadband to carry all the transactions, because you can build a network for your average load, and then it falls apart of course when it peaks."

Bill Bolin, vice president of operations for Cave Creek-based Systems Technology Staffing, is contracted with the state through the Northern Arizona Council of Governments to help rural communities get broadband.

The Verde Valley has grown in population as well as in the number of small businesses operating within Cottonwood, Camp Verde and Cottonwood.

"Small businesses cannot survive without the internet and without broadband capacity," Bolin said.

Using Douglas, Ariz., as a model, along with what has been done in Cochise County, VVREO and Bolin have invited providers across the state to an informational meeting May 15 where they will discuss options for laying cable and how to finance it.

Funding from a federal rural broadband initiative under the American Recovery and Reinvestment Act is running out, so the group is looking to private service providers to keep the process going.

Filardo said with more people at the table, companies will be more likely to take the risk of laying cable now in order to make a profit later.

After the economic downturn, many of these providers were burned by laying cable in "phantom subdivisions," where each lot was connected only to serve a home that was never built.

Along with the possibilities for companies along SR 260, Filardo said she hopes the meeting leads to mapping where fiber is already in the ground, waiting to be lit up.

Cell towers are also in the mix, through companies like Verizon and ATT who can then connect to broadband cable and bring it in the air.

"Our hope is that this will capture the imagination of some of the providers to say, I know we have fiber here, I can connect to fiber I have, light that up, and that can connect to (SR) 260," Filardo said.

Even if conduit and fiber is added along the full length of SR 260 improvement, from the I-17 to Thousand Trails, Filardo said this still doesn't connect Cottonwood to Clarkdale.

"We're taking baby steps to move forward," she said. "It's one of these projects that seems to be forever in the planning stages."