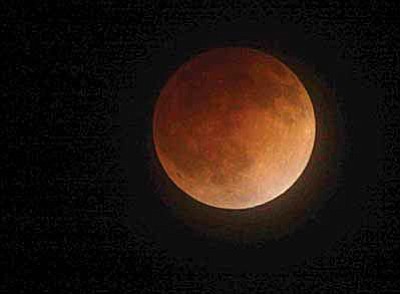 The United States had prime viewing for the total lunar eclipse April 15.

Depending on weather conditions, the public got a spectacular view looking into the sky as the moon's appearance changed from bright orange to blood red to dark brown and perhaps gray.

The eclipse is a phenomenon that occurs when the Earth, moon and sun are in perfect alignment, blanketing the moon in the Earth's shadow - for the "blood moon" look. This image was taken in San Jose, Calif.

The United States will not be able to witness a full lunar eclipse in its entirety again until 2019; however, depending on your weather and location, following are eclipse opportunities in 2014:

• April 29 (solar eclipse), at the Moon's descending node in southern Aries. This particular eclipse is rather unusual because the central axis of the Moon's antumbral shadow misses Earth entirely while the shadow edge grazes the planet. It is classified as a non-central annular eclipse, and such events are rare.

• Oct. 8 (the second lunar eclipse of 2014), which is supposed to be "total." The eclipse occurs at the Moon's descending node in southern Pisces.