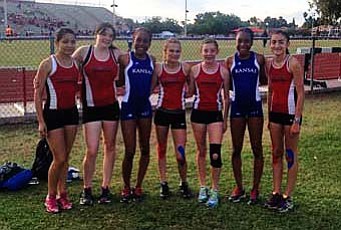 Under the Friday night lights of Mesa Community College, the athletes of Aftershock Distance Club took to the track one final time against collegiate athletes before setting their sights on the upcoming USATF championship season.

The evening started off with the 800-meter and Allyson Arellano set the stage. The high school freshman finished second in her heat with a new personal best of 2:22.10, shaving a full second off her previous best.

In the next race, the 1,500-meter, four Aftershock runners took the track. Sophomore Karen Arellano led the way on the ladies side with a time of 5:18.04, a second place finish in her heat. Following Karen were 8th graders Swayze Smith (5:20.33) and Sydney Alexander (5:35.08), both of whom set new PRs in the event. Also in the race field were local athletes Mykala Seresun (Central Arizona College/Sedona Red Rock) and Taylor Gage (Central Arizona College/Sedona Red Rock).

On the men's side freshman Chris D'Angelo ran an inspired race. His finishing time of 4:21.48 eclipsed his previous best by over 8 seconds in the 1500-meter. For Chris and the three Aftershock ladies, the keys to success were getting out quickly and staying aggressive through the middle laps of the race.

Sophomore Penny Fenn took to the track in the 3,000-meter steeplechase. For the second time in as many tries, Penny was able to run a time that would qualify her for the junior college national championships. Her finishing time of 12:23.06 was a four second improvement from two weeks ago. As Aftershock moves back to the youth ranks, Penny will look to eclipse the USATF state record in the 2000-meter steeplechase.

Allyson Arellano capped off the night with a dominating victory in the 5,000-meter. A race field of 22 athletes included two NCAA Division-I runners and four NCAA Division-II runners. Allyson took control of the race by the 1,600-meter mark and never looked back. Her winning time of 18:32.90 was more than 30 seconds ahead of 2nd place Lacey Peterson (19:05.57) of Grand Canyon University. The race field included local athlete Skyler Storie (Central Arizona/Mingus Union).

In the weeks ahead, Aftershock will use some USATF meets to fine tune things before heading to California for the LA Jets Invitational in late May.