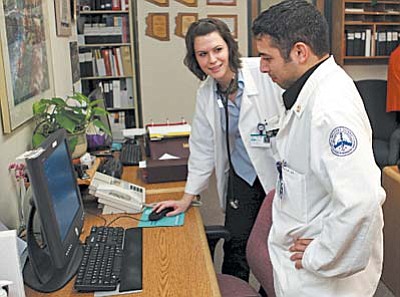 Verde Valley Medical Center measures its data use daily, a chore that would be diminished by the presence of broadband and allow the hospital to more aggressively provide care based on what patients need.

Second in a three-part series

Community leaders are looking to broadband for reliable internet service that would expand the reach of telemedicine for the Verde Valley's most rural residents and attract businesses.

"Is it perfect all the time? No," Sorenson said. "Are there dead zones or areas where there is no coverage? Yes."

Parts of Sedona, Cottonwood and Cornville can have very slow connections that make telemedicine unreliable.

"The need to bolster that capacity in the Verde Valley is very important to us so that the quality is where we need it to be," she said. "So we can see that when the mouth moves on the person, the voice comes out, not a second or two seconds later. So that it is as if you're sitting with the person you're visiting with."

Patients can drive an hour and a half one way for a 15-minute appointment, which is especially difficult for people who have difficulty getting around or have a sparse support system at home.

"We are dealing with populations that don't have family or friend resources to help support them," she said. "They live alone, have limited income and transportation. We can take the care to the patients. That's really critical."

She said telemedicine can seem bizarre, but it's become the norm for many patients since the hospital starting offering it four years ago.

Broadband would also make it possible for patients to have monitoring devices in the home. Remote monitoring has been in place for about a year in the Verde Valley, and two years in the Northern Arizona Healthcare system.

"There needs to be a consistent wireless internet connection so that when they take their blood pressure or weight in their home, it consistently and automatically uploads to where it needs to go," she said.

Along with health monitors using data, patients and their families are showing up at the hospital expecting to sign in their laptops and cell phones to the hospital's Internet.

"It's not just in regard to equipment, but the social aspect of what families and patients need to stay connected in the hospital," she said.

The hospital measures its data use daily, a chore that would be diminished by the presence of broadband and allow the hospital to more aggressively provide care based on what patients need.

"We only have this much from our broadband bucket we can pull from before we start to slow down the system," she said. "We know and are finding out on a consistent basis as we push more patients into our program where we struggle with connectivity and how can we get past those issues."

Partnering closely with its wireless carriers, the hospital is keeping an eye on places where "broadband lines are being laid so we know where we'll have more and more access to patients," Sorenson said.

Providers will get a chance to discuss these and other possibilities during the May 15 providers meeting, said Clarkdale economic development director Jodi Filardo, a long-time proponent of broadband and a member of the Verde Valley Regional Economic Organization's broadband coalition.

"If we want people to come here who are young, innovative, entrepreneurial ... what we want to do is expand internet-based buisnesses," Filardo said. "And internet-based businesses need speed. Big, broadband, utility-grade accessibility."

She and other economic development experts are working to convince internet providers to shoulder the multi-million-dollar cost of laying conduit and fiber along State Route 260, slated for improvement as early as 2016.

Under Senate Bill 1402, passed in 2012, providers are able to work directly with the Arizona Department of Transportation to lay these lines while construction is already underway, and at no cost to the taxpayer.

"We think it would be advantageous for vendors to put the conduit and the fiber lines themselves," she said. "They'll have to figure out how they want to participate in that, and we don't know how that's going to go."

Providers who do participate would be able to lease access to these lines, theoretically to internet-based businesses that would locate in the Verde Valley if broadband were available.

"Opportunities for expansion and large data movement; people don't count on those yet because we don't have this big, robust infrastructure to support them," Filardo said. "As soon as we get these major infrastructure elements together, the sooner we can start pitching that aspect of the joy of living in the Verde Valley and the quality of life."

"The individual does not have to drive an hour to go one way to get results," Bolin said, also noting that workers today are "very dependent upon the Internet" to keep up with their job skills.

"We did surveys all across the state of Arizona," he said. "Jobs became the No. 1 criteria for broadband."

"For rural areas, it's just really hard to get enough businesses together to make it worthwhile for the provider to pick up that cost of it," he said. "We know that there's a return on that investment, but it's a pretty substantial investment to make."

He said people who can work from anywhere, like artists or graphic designers, do have to limit themselves to where the Internet connections are reliable and fast.

"We could attract those kinds of folks to the Verde Valley," he said. "They're having to stay in an urban area where the high-speed Internet permits them to conduct business."

The platform for much of the work being done today doesn't exist in many rural communities, Ayers said.

"The Verde Valley has beautiful scenery, but we don't have broadband, so we can't attract those good jobs and those companies that are forced to locate in urban areas."

Filardo said the process is taking "baby steps," but that a variety of people have become involved so that the Verde Valley can see the benefits enjoyed by bigger communities.

"There are many of us here who will see benefits from a Verde Valley-wide approach to this, and that's why we all banded together," Filardo said. "There really is something in it for everyone."