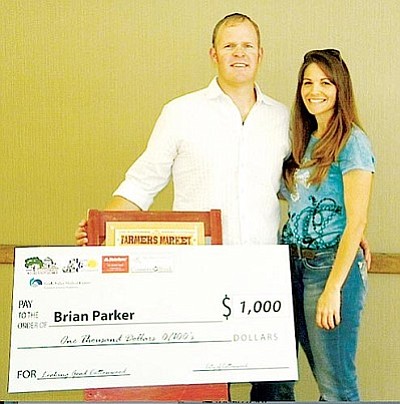 COTTONWOOD-Prizes of $1,000 each were given to the contestants who lost the most body mass as winners of the 2014 Lookin' Good Cottonwood weight management program.

Second place finishers took home $500, with a $20 prize for the 3rd place. Thursday, they were honored in an After Party celebration at the Cottonwood Recreation Center.

After the 12-week "Biggest Loser"- type program of lessons on weight loss through exercise, diet and a healthy lifestyle, awards were made to the man, woman and the group that made the largest change in body mass. The 166 women were very competitive and close every week in their loss, according to Trevor Faust, the Fitness Center Supervisor. There were also 59 men.

Becky Allen placed first by losing 20.81 percent of her body mass at 38 pounds. She was also a member of the first place group team, the Cereal Killers, which had an average loss of 11.36 percent among the five members team. Remarkably, Allen was also on last year's winning group, Team Purple. Her brother was on hand as another of the winning team members.

Allen admits she was a couch potato and a junk food junky. She gave up going out to eat and diet soda.

"I want to lose 15 more pounds. It's been so long since I have been at that weight."

Brian Parker placed first in the Men's category by losing 21.89 percent body mass with a loss of 62.2 pounds.

"I am really active as a firefighter in Flagstaff and have done research about food and nutrition. But having to come in and do weight checks keeps you in line. My wife Leta also participated as well and was No. 9 out of women.

"The hardest thing for me is time," Parker says." I have four kids, and am putting an addition on my house and that is toughest. I think I already had the fitness down, but I got the eating down too. I figured out a lot of things that taste good and are satisfying, but are much healthier."

Both second place men's and women's finalists were in the same family too. Doug and Estella Braly achieved the same weight loss separated by only .4 pounds in Doug's favor. Stella however reduced her body mass by 19.6 percent, Doug by 16.81 percent.

Stella Braly loves to cook: "We would have a family dinner every night. We were the heaviest we have ever been, but now we are empty nesters, with the girls in college." It was easier to control what she and Doug ate at the table. "The girls come home from college and complain, 'What are you eating?'"

Doug Braly said his only exercise routine was walking back and forth the four and a half miles to work each day. Stella uses the track at the high school where she works.

Mary Cavines just had tests done and was surprised to find almost a 100-point drop in total cholesterol. She placed fourth among women with a body mass reduction of 17.76 percent..

"My triglycerides and LDL are down as well. Mostly, I have been staying away from carbohydrates. I always give up sweets for Lent, anyway. But, I can't tell you how much better I feel. I have a 3-year-old Lab and he is my training partner. I am looking forward to more physical activity. Maybe the half marathon."

Total pounds lost during the LGC competition - 1,480
Report a Typo Contact
Sign up for our e-News Alerts
Most Read
7 days
30 days