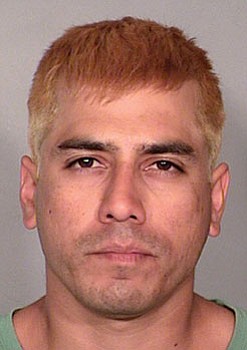 FLAGSTAFF -- Coconino County Sheriff's deputies and detectives have been investigating an incident in which a 60-year-old woman became the victim of an assault and auto theft while traveling from South Carolina to Northern California. The afternoon of April 9 the Sheriff's Office and DPS were dispatched to the Meteor Crater rest stop off of Interstate 40.

The woman had stopped at the rest stop to use the bathroom. She said there were numerous cars in the parking lot and she saw a number of people walking in the area. She saw only one person in the bathroom, a person that walked past her stall. But as she left the stall, she glanced behind her and saw a man standing on the toilet in the neighboring stall. The woman said the man's hand was underneath his shirt and appeared to hold a gun.

The man demanded her car keys and then punched her in the face, knocking her to the floor. While the victim was down, the suspect forcibly grabbed her keys, ran from the bathroom and drove out of the rest area parking lot onto the interstate.

CCSO and DPS conducted an extensive search for the suspect and vehicle, also assisted by the DPS helicopter. A nationwide ATL was broadcast for the victim's vehicle with a physical description of the suspect and the vehicle entered as stolen into the National Crime Information Center computer.

A Las Vegas officer received a signal from the victim's vehicle and conducted a traffic stop. The alleged carjacker is identified 32-year-old Renee Cadriel of San Antonio, Texas. Cadriel was arrested on suspicion of possession of a stolen vehicle. Las Vegas Metro detectives are helping the CCSO with this case. The victim was shown a photo lineup with a picture of the driver the Vegas Police arrested, and the woman positively identified the suspect as the one who assaulted her.

The suspect is held on a warrant issued by the Coconino Justice Court charging him with armed robbery, theft of means of transportation, and assault with a bond of $100,000. Extradition is pending.