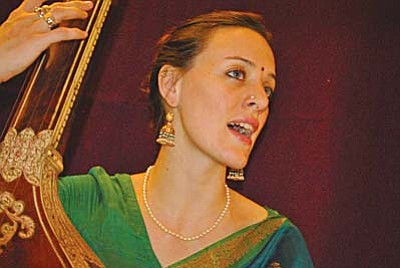 Vocalist Emmanuelle Martin, performing in traditional South Indian style, with musicians on violin, mridangam (drum) and tambura on Friday, April 25, at 7:30 p.m. at 7 Centers Yoga Arts. It is the hypnotizing beauty of the singing which both sets the stage and invokes the sacred mood of this music.

Emmanuelle Martin is a French native who has excelled as one of a rare few Westerners to undertake an apprenticeship to this demanding and ancient art form. Growing up with parents classically trained in Western music, from before she could talk Emmanuelle was surrounded by the practice and appreciation of music with merit. By age 4 she had started Western musical training. Her father, as well as being classically trained in Western music, practiced and taught Carnatic singing, the classical music of southern India, but it was a style of music that didn't interest Emmanuelle - until a vocal teacher from India came to visit. After a couple hours in his workshop, hearing his pure expression of Carnatic music, something shifted in her. She was irrevocably hooked.

At the age of 19, she moved to Chennai, India to devote herself to the art of Carnatic singing, and she lived there for nearly 10 years, studying with renowned music master T.M. Krishna. Carnatic music is passed down orally from teacher to student in a millennia-old tradition of discipline and commitment. She now travels between India, France and the United States performing, teaching and continuing her own training, driven by a profound commitment to her art.

Since starting to perform publicly in 2012, Emmanuelle has performed at the Raaga Tapasya Sacred Music Festival in Pondichery, India, for Shivaratri Festival in Chennai, India, and at main venues for the Madras Music Season in Chennai, the largest and most prestigious Carnatic music event in the world; she's one of the few Westerners to participate in the festival.

Tickets are $20 and are available at Crystal Magic, www.BhaktiTribeSedona.com or at the door.