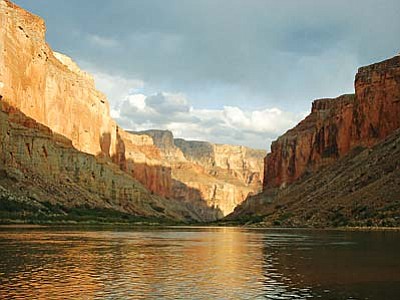 The Colorado River flows through the Grand Canyon. A federal study found that fish in the Grand Canyon and 20 other national parks in the West have trace amounts of mercury. (U.S. Geological Survey Photo)

PHOENIX - With their natural beauty and protected environments, the Grand Canyon and other national parks in the West would seem removed from having mercury in their streams and rivers.

But a federal study found small levels of the contaminant in rainbow trout and brown trout at three Grand Canyon creeks - Bright Angel, Havasu and Shinumo - as well as in fish at 20 other parks.

While none of the levels found by the U.S. Geological Survey and National Park Service exceeded standards for mercury set by the Environmental Protection Agency, Colin Eagles-Smith, the lead author, said the findings provide the first comprehensive look at mercury levels in western national parks.

"We often hear the negative side of the story with things like mercury," Eagles-Smith said. "The positives from this study were that we studied a lot of parks and a lot of lakes and in the majority of those systems, mercury concentrations were low."

However, some environmental advocates said they're concerned because the locations studied were thought to be distant from contaminants.

"We hope that our national parks are some of the most pristine, best protected areas in the country," said Kevin Dahl, senior program manager for the National Parks Conservation Association. "There's typically no industry in these parks, so they're the farthest removed from potential sources of pollution."

Fish at all three creeks studied in the Grand Canyon had more mercury in their systems than trout of comparable weight and length at the other parks.

In addition, trout at Shinumo Creek had double the amount of mercury of fish from the other two creeks, though it's still a mystery as to why, Eagles-Smith said.

"The goal of this study was really not to answer why on any of these things but to look at how mercury is distributed across the landscape in this large area," he said.

Known for its use in thermometers and some light bulbs, mercury is a liquid metal that can harm the brain, heart, kidneys, lungs and immune system. It's particularly harmful for pregnant women and children, according to the Environmental Protection Agency.

Mercury's entry into an environment is incredibly complex, said Eagles-Smith. So in order to work toward developing a map of mercury's journey to the fish, researchers need to know how much is there in the first place.

"It's a matter of getting a better understanding of how mercury is distributed across all the sites within parks," he said.

Jeff Olson, a National Park Service spokesman, said that while the study reveals no specific source for the elevated mercury levels in these remote places, human activities have taken their toll.

"We believe that most of the mercury that affects parks comes from burning fossil fuels like coal in power plants," he said.

According to the study, mercury levels in Earth's atmosphere have tripled over the last 150 years.

Paul Gremillion, an assistant professor of environmental engineering at Northern Arizona University, has worked with the Arizona Department of Environmental Quality to examine Arizona reservoirs known for higher mercury levels.

Most mercury doesn't enter an environment in the liquid-silver-blob form it's known for, Gremillion said. Instead, it's a vapor that can blow across continents and reach Earth's surface via rain.

That's why there's no simple way to discover the mercury's origins, he said - because it's such a world traveler in its atmospheric form.

"There's not an easy way to figure where this came from. You have to piece together a lot of different elements of evidence," he said.

Vaporized mercury from coal burned at power plants as far away as China can find its way into America's water systems, he said.

Roger Clark, program director for the Grand Canyon Trust, said he wasn't surprised by the higher mercury levels because of 17 coal-fire power plants in Arizona's region of the Colorado Plateau.

"The cumulative effect of coal plants are certainly being felt throughout the West," Clark said. "They are the largest single source of mercury contamination in the region."

Mercury becomes concentrated as it goes up the food chain into larger predators, because a large trout might eat 10 insects that consumed mercury, said Jonathan Evans, a toxics and endangered species campaign director at the Center for Biological Diversity.

"Even small amounts of mercury are highly toxic, so power plant pollution can have a devastating impact on wildlife and human health," Evans said. "It's one of the continued problems of our fossil fuel addiction."

Dahl, from the National Parks Conservation Association, said higher levels of mercury shouldn't be in Arizona's waterways, whatever the source.

"We all want the cleanest possible Colorado River water, so whenever there's any indication of something as toxic as mercury, even though it's naturally occurring, we don't want to be drinking mercury. We don't want to be eating things that have mercury in them," Dahl said.

Alicyn Gitlin, Grand Canyon program coordinator for the Sierra Club, said the only sure way to prevent such contaminants is moving to cleaner energy.

"The place where we should have some of the cleanest air in the country, we have coal-fired power plants releasing chemicals like mercury into the environment and that is harming the fish," Gitlin said.

 86 lakes and rivers in remote areas