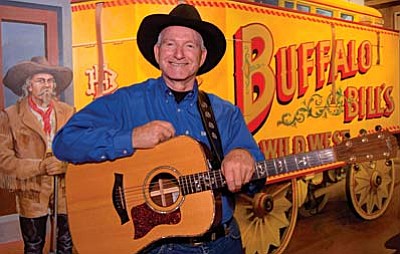 Besides being the official state historian, Marshall Trimble has been called Arizona's Will Rogers.

Cowboy singer, humorist, storyteller and Arizona State Historian, Marshall Trimble will be in Old Town Cottonwood on Saturday, April 26th at 7:00 PM at the Old Town Center for the Arts. Opening the concert will be singer-songwriter Dan Engler, whose insightful, humorous and thought provoking lyrics have engaged a faithful local following.

Marshall Trimble, who has been called 'Arizona's Will Rogers', and is known throughout Arizona, brings history to life with his music and storytelling, delving into the fascinating tales of Arizona and the west. He has performed throughout Arizona for decades and has become well known across the United States as an ambassador of good will for the State of Arizona.

Who would have ever thought that a drop out from Phoenix College would become the Arizona State Historian? What a fascinating life, through the back roads of Arizona! This multi-talented historian has been called the "Will Rogers of Arizona." He can deliver anything from a serious history lecture to a stage concert of Western folk music and stories with his guitar. Trimble has received many honors both as a historian, writer and performer. In 1997, the governor of Arizona appointed him Official State Historian. In 2000, he was selected as one of Arizona's representatives in the Library of Congress' "Local Legacies." Two years later he received the first "Copper Star Award" from the State Society of Arizona in Washington D.C. In 2003 he received the Scottsdale Jaycees "Distinguished Service Award," That same year he was named a Charter Member of the Arizona Culturekeepers. Marshall was inducted into the Arizona Music and Entertainment Hall of Fame in February 2011.

In February 1957 Trimble dropped out of college and joined the Marines. Inspired by a Marine buddy, he purchased his first guitar in 1958 and taught himself to play while listening to records by Johnny Cash and Buddy Holly. His motivation for learning the guitar was to overcome shyness and to attract girls. He returned to college and graduated from Arizona State University in 1961. Two years later Trimble was touring with the Gin Mill Three, a folk group performing Kingston Trio inspired music. During his travels he took the opportunity to visit a variety of historical sites and museums. While visiting the Little Big Horn Battlefield in Montana in 1968 Trimble made up his mind to become a western historian and write. He returned to Arizona State University taking every available course in Arizona and Western history. In 1969 he began teaching Arizona and Southwest History at Coronado High School. As part of his teaching style, he played his guitar and sang old Johnny Cash songs to demonstrate how folk music and history were interrelated.

In 1972, Trimble was asked to create an Arizona history class at Scottsdale Community College and in 1977 began serving as director of that school's Southwest Studies program. After publishing his first book in 1977, he used his guitar and songs to liven up promotional book readings. Since then he has hosted several radio shows, including Trimble's Tales and The Emmy award-winning television show, Arizona Backroads. Additionally he has appeared on CBS This Morning, Good Morning America, KAET-TV at ASU and the Nashville Network.

Old Town Center for the Arts is honored to present Marshall Trimble, a living legend in Arizona. Come be entertained and reminisce about our state's great history. This concert also marks renaissance man Dan Engler's eighth performance at OTCA.