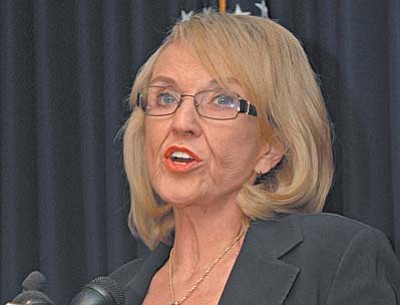 Gov Jan Brewer: "I am a strong proponent of the Second Amendment and I have signed into law numerous pieces of legislation to advance and protect gun rights. However, I cannot support this measure in its proposed form.'

PHOENIX -- Arizonans will not be allowed bring their guns into public buildings, at least not this year.

Gov. Jan Brewer vetoed HB 2339 which would have allowed those who have a state-issued permit to carry a concealed weapon to ignore a "no guns' sign posted at the door. The only way a government agency could keep out all weapons would have been to install metal detectors and place armed guards at each public entrance.

Separately, Brewer vetoed legislation to add more teeth to existing laws that pre-empt the right of cities to enact their own gun laws.

HB 2517 would have required a court to assess a fine of up to $5,000 against any elected or appointed government official, or the head of any administrative agency, if there is a knowing and willful enactment of a local gun law that exceeds the restrictions permitted by the state.

That same measure also would have precluded the use of public funds to defend or reimburse someone found guilty of breaking the law for his or her legal costs. And it would have permitted individuals and gun-rights groups to sue local officials and, if they are successful, get reimbursed for actual damages of up to $100,000.

"A person or an organization who perceives an ordinance is illegal already may seek remedies through the legal system,' she wrote in her veto of HB 2517. The governor also said she was "troubled by the vague and punitive provision that a person in violation of the statute is 'subject to termination from employment.'

Current law says anyone carrying a weapon has to surrender it at the door of a public building if there are lockers immediately available. But only some buildings have armed guards and metal detectors to ensure compliance.

Proponents of the legislation said the result is a false sense of security for those who obey the signs. They are left defenseless if someone else ignores the signs, enters the building and starts shooting.

"I am a strong proponent of the Second Amendment and I have signed into law numerous pieces of legislation to advance and protect gun rights,' Brewer said in her veto message. "However, I cannot support this measure in its proposed form.'

Brewer specifically expressed concerns about the cost to cities, counties and other government agencies who want to keep their buildings free of guns but may not have the resources to purchase the necessary equipment and provide guards at each door.

"This bill would establish an unfunded mandate on our state and local governments,' she wrote. "It is an unnecessary diversion of limited resources.'

John Wentling, lobbyist for the Arizona Citizens Defense League, said the veto of HB 2339 is in some ways a surprise.

He said the legislation was recrafted after Brewer vetoed a similar measure in 2012 to make it more acceptable. That included limiting the right to bring guns into public buildings to only the approximately 200,000 Arizonans who have a state-issued permit to carry a concealed weapon.

But it may be that no version of a bill to allow guns into public buildings may be acceptable to Brewer.

In vetoing the 2012 measure, for example, she noted that even U.S. Supreme Court Justice Antonin Scalia recognized the legitimacy of laws "forbidding the carrying of firearms in sensitive places such as schools and government buildings.'

Brewer also questioned at the time having the state unilaterally decide where guns should be allowed. She said if guns are to be allowed in public buildings those decisions should be "cooperatively reached' and not just mandated by the Legislature.