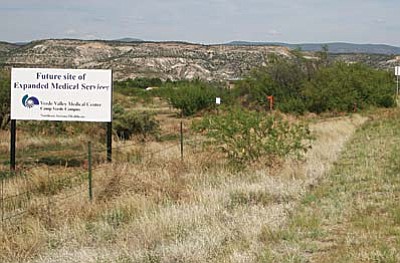 “Having a modern, accessible health care facility in Camp Verde is as much a part of the infrastructure of the community as roads, sewers and water lines,” says Economic Development Director Steve Ayers of VVMC’s plan to build a 26,500-square-foot urgent care center on Finnie Flat Road in Camp Verde. VVN/Bill Helm

Speaking at the Town Council's April 16 regular session, Ayers reviewed projects completed, projects underway and projects planned since he took over as the Town's economic development director in February 2013. Calling VVMC the town's "first big investor," Ayers told the council that timing of the much-needed medical facility, to be built on Finnie Flat Road near the intersection of SR 260, "is as important as the investment."

"Having a modern, accessible health care facility in Camp Verde is as much a part of the infrastructure of the community as roads, sewers and water lines," Ayers said. "We are very pleased with the working relationship that we've developed with VVMC and their parent company, Northern Arizona Healthcare."

Northern Arizona Healthcare (NAH) will officially announce plans in May at an open house, according to Trista MacVittie, NAH marketing, branding and public relations director.

"The fact that you will have this health care facility is really big, as [we] are trying to attract other businesses or even builders to the community," Ayers said.

According to Camp Verde Mayor Charlie German, the new VVMC urgent care center is "going to act as an anchor" to Finnie Flat Road.

"I think we're right on the edge of some exciting things, economically," German said.

Northern Arizona Healthcare has owned the 29-acre parcel in Camp Verde since 2008. According to Ayers, the $10 million project includes the urgent care center, helipad, parking and landscaping.

Ayers also said that the value of "this beautiful facility at the very entrance of our downtown can't be underestimated. A good deal of credit needs to go to Mayor Charlie German. Charlie's relationship with VVMC CEO Barb Dember was instrumental in moving this project to the top of their list."

Said Town Manager Russ Martin, "If it were not for [German and Dember], this would not be happening.

"If health care can be provided here in Camp Verde, then people may not go out of town to get other services," Martin said. "This also signals that investment that people are making to Camp Verde's future, which is also good for attracting developers."