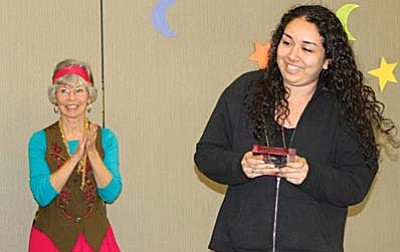 Cottonwood Public Library recently hosted their annual Volunteer Appreciation Luncheon to recognize the importance and value of their 80-plus volunteers. Without the volunteers, services at the library would greatly suffer. There is much going on behind the scenes that require staff attention. Volunteers fill in the gaps that would otherwise necessitate staff time.

Every year an award is given for two volunteers of the year, one for adult and one for youth services. Rosemary Price was awarded Adult Volunteer of the Year.

She not only works her scheduled shift once a week, but she also fills in for others if she can. Moreover, Rosemary spends hours per week in her other volunteer position as the Treasurer of Cottonwood Bookmarks, the Friends of the Library group.

Marisol Loreto received the award for Youth Services Volunteer of the Year. Marisol is a teen volunteer, working after school several days a week. She is a shining example to others her age.

There were three volunteers who received a special award.

Mary Eichman received a plaque for her many years of service as Cottonwood Bookmarks President. She spends many hours a week restocking the Bookmarks Book Boutique.

If you are interested in becoming a volunteer at the Cottonwood Public Library, call 928-634-7559 or stop by the library at 100 S. Sixth St. in Cottonwood.