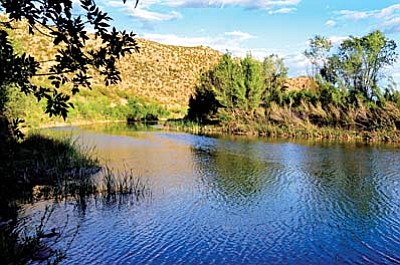 With California reeling from damaging water shortages in the Central Valley and more than a decade of drought in the arid Southwest, it's a good time to think about our budgets - not only financial accounts, but "water budgets." A water budget is simply an accounting of water resources, the amount entering and leaving, and stored in, a drainage basin (watershed) or aquifer. Water budget estimates can provide holistic views of water resources for an area like the Verde River and its tributaries, a remarkable aquatic habitat and riparian gem in Arizona.

Generally, water availability in storage within a watershed is governed by the same basic rules that determine how much money we can spend from our bank accounts: Inputs (Income) - Outputs (Expenses) = Change in Storage (Change in Account). So, how are water budgets determined?

The development of a water budget is based on the premise that water resources for a watershed are products of the water (or hydrologic) cycle, the name given to the cyclic movement of water. Water travels from the atmosphere (i.e., rain and snow) to soil moisture and runoff, to streamflow, to groundwater, to oceans, and largely returns to the atmosphere through evaporation and vegetation uses referred to as evapotranspiration or ET.

Water supplies within the Verde River watershed are mostly derived from large aquifers that are hydrologically connected to the Verde River in a region with relatively low precipitation and very high ET rates. As such, aquifer recharge rates occur at 1 to 3 percent of average annual precipitation amounts. Because of these unfavorable natural conditions, along with increasing water demands, significant groundwater and streamflow depletions have occurred in the watershed.

Just like a financial budget, a water budget appraises sources and amounts of income (precipitation and other water additions), savings (water storage in aquifers and reservoirs), and expenses (ET and water uses including potable, industrial, irrigation) to determine how much water can be consumed without running a deficit against available supplies. Watersheds have particular carrying capacities for water uses based on various interacting factors, such as amounts of precipitation and how water moves and exits, that regulate how much water is produced and stored in soils, surface waters and aquifers.

For the Prescott Active Management Area, the Arizona Department of Water Resources (ADWR) calculates that the average yearly natural recharge between 1985 and 2012 was 4,400 acre-feet per year (ac-ft/yr) while the average usage over that period was 13,600 ac-ft/yr. Yes, water use exceeded natural recharge by over three times.

For larger areas such as the Verde River system, water budgets may lead to development of mathematical models that can simulate different water management options, such as artificial aquifer recharge and water augmentation projects, to predict watershed responses, such as impacts on springs and streamflows.

In 2011, the U.S. Geological Survey released the Northern Arizona Regional Groundwater Flow Model (NARGFM) to examine the response of the Verde River base flow (the portion of streamflow attributable to groundwater) under current and projected groundwater pumping scenarios. Historically, since 1910, the base flow has decreased to three-fourths of its pre-development flow. Results from NARGFM simulations conducted by Citizens Water Advocacy Group (CWAG) scientist Dr. P. Kroopnick predict further reductions of Verde River base flows vital to year-round (perennial) flows. For example, a 100-year simulation maintaining current groundwater pumping locations and rates, and adding the ADWR-approved transfer of water from the Big Chino Water Ranch, predicts Verde River base flow may be reduced to only about one-fourth of its 2005 level at the Paulden stream gage. This shortfall would have severe ecological and economic implications, and would result in the loss of major springs and significant water-level declines in surrounding wells.

The Verde River upper watershed (Big and Little Chino groundwater sub-basins) water budget imbalance demonstrates the unsustainability of regional water supplies overall. Arizona's divergent water management system, where groundwater and surface water are considered separate and unrelated sources under the law, has proven to be a serious deterrent to tackling water budget imbalances. As citizens, we can practice good watershed stewardship (e.g., water conservation) and urge decision-makers and politicians to implement new policies and shared management of water resources, including preservation of the Verde River, one of the few remaining perennial rivers in the Southwest.

Wayne Hood, R.G., is a retired hydrologist teaching water resources classes for colleges as adjunct faculty, and is a member of CWAG in Prescott.