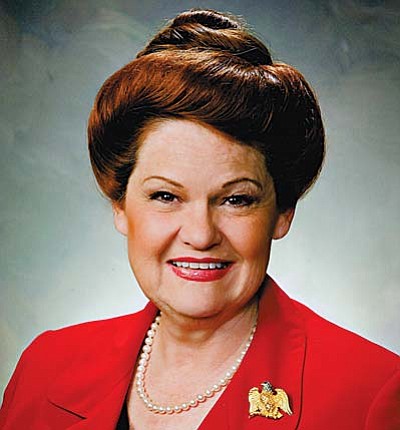 Rep. Brenda Barton: “Chester’s passion for education and rural Arizona was admired by all,” Barton recalls. “He is missed, he was a true statesman for rural Arizona.”

ARIZONA -- Brenda Barton remembers helping to recruit Chester Crandell in 2009. "He was a dear friend that made going down to the Capitol a joy as we worked to make Arizona a better place every day," she says.

Barton was told the Dist. 6 state senator left for a one-hour ride at about 10 a.m. Monday morning on what investigators have been told was a "new colt."  When Chester did not return as planned, family members conducted a search on the DeSpain Ranch, north and east of Heber-Overgaard.  Crandell was found about 2 p.m. on the same route that he had described before leaving.  Family members reported that he had died when they found him. His horse was found in the area.

"Chester's passion for education and rural Arizona was admired by all," Barton recalls. "He is missed, he was a true statesman for rural Arizona, and he's riding another range and keeping his eye on us. I will continue to stand up for the beliefs I proudly shared with Chester."

Tom O'Halleran of Sedona is running as an independent for the same seat in the Senate that Crandell held as a Republican. He spoke frequently with Crandell during the past campaign and this time as well, talking about school issues.

"Everyone is entitled to positions. Some of those opinions I agreed with and many I did not, but he was a very well-intentioned person," O'Halleran says.

"I think this is a tragic thing that occurred. He had a wife, nine children and 30-some grandchildren. None of them got to say goodbye to their husband, father and grandfather. It is extremely sad how this occurred.

"I have suspended my campaign so that we can deal with a the realities of Chester dying and allowing his family to mourn and remember him."

Statute allows for replacing a legislator who dies in office.

Crandell was running unopposed for re-election in the Republican primary to represent District 6. No Democrats are seeking the seat. As an independent candidate, O'Halleran, a former state senator, is on the November general election ballot. There is no primary for independents.

Crandell was born in Holbrook and raised in Heber, where he lived with his wife, Alice, and raised nine children. He had a bachelor's degree in agriculture education from the University of Arizona and master's degree in education leadership from Northern Arizona University.

Crandell was an educator for more than 30 years, including 10 years as superintendent of Northern Arizona Vocational Institute of Technology in Snowflake.