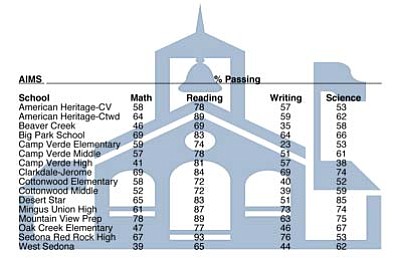 The Mingus Union High School and Clarkdale-Jerome Elementary school districts maintained their B grades in 2014, according to data released Monday by the Arizona Department of Education.

Both Mingus Principal Jennifer Chilton and C-JS Principal Scott Jacobson said falling by a point or two doesn't indicate much.

The principals pointed out that having any kind of data helps teachers understand student learning. Without knowing what the new assessment will be to replace AIMS in the coming year, both are still using AIMS results to guide improvement.

Chilton said Mingus is going to start using Galileo testing this year so that students have access to huge banks of vetted test questions, and the school gets results continuously.

"As a small district, we don't have the resources to be able to keep our own benchmark tests updated and valid, particularly as standards change incrementally," Chilton said. "It's a hard thing to do on your own."

Chilton said the school has been hovering at a high B for a while, and students met the last set of goals set down by the district for AIMS reading, writing and math.

"It'll be interesting to see what the department of education proposes for next year," she said.

Jacobson said the school will continue to focus on its lower 25 percent and on writing at the junior high level, where gains were made in the last year.

"There are some new areas we're going to focus on now," he said. "It's an ongoing reflective process."

He said Steve Doerksen was recently hired on as the assistant principal, which will allow the district to create a system where administrators can focus on the details of improving education.

"With some help, now we can divide and conquer," he said.

Cottonwood Elementary School was the only campus to fall a letter grade, from a B to a C. The only A grades were recorded at Cottonwood-Oak Creek's Mountain View Preparatory School, Sedona-Red Rock High School and the Accelerated Learning Charter School in Cottonwood.

PHOENIX -- Saying schools have proven they can do better, the state's top education official said Monday it's time for lawmakers to provide more cash -- or at least settle the lawsuit over withheld inflation funding.

John Huppenthal boasted that 20 percent of schools in the state improved their academic performance last year. And another 63 percent managed to maintain their ratings in the state's A-F grading system.

Those grades are based on everything from results on standardized tests and the number of "English language learners' who become proficient to simply the fact that students are improving, even if many are still performing below standards.

He also said the number of third graders who were in danger of being held back because they were not reading at acceptable levels fell from 1,152 in 2013 to just 602 this past year.

"It's incredibly positive when you consider the stress that Arizona schools have gone through for the last three years,' he said of the results.

Some of that is implementing new standards, like "move on when reading' requiring third graders to show they can read. But he also noted the cuts to state aid to schools, including the failure of lawmakers to follow a voter-approved law to boost funding to account for inflation.

Huppenthal said there is now proof that schools can -- and have -- done better. And he said it's time for lawmakers to take notice.

The report comes as legislators continue to fight a court order to reset basic state aid to education to the level it should have been had they not in 2009 started to ignore the requirement to make annual inflation increases.

That alone totals about $316 million a year. And Maricopa County Superior Court Judge Katherine cooper also may order the state to repay $1.7 billion the schools did not get in the past.

"But they are in a desperate sense that, in the past, that investment in education hasn't seemed to pay off,' he continued.

He said, though, the record of what schools have done here -- and with less -- shows it's time for legislators to recognize that money does matter.

"We're willing to make that case, not only how to shape that potential $300 million (in inflation funds) but also to make sure we get our fair share out of the general fund,' Huppenthal said.

He conceded the second half of that goal could prove difficult.

"We're in the greatest recession since the Great Depression,' he said. "There's not much money over there to lobby for.'

But what there is, Huppenthal said, is that inflation money he believes schools are owed -- and need.

"The local school districts know best where to apply that,' he said. Huppenthal said it is clear that classrooms need to be resupplied with books and other teaching materials that were not purchased.

The message that money matters was underlined by Seth Staples. He is superintendent of the Ash Fork school district which this year was rated the highest public school district in the entire state.

Staples noted that just four years ago Ash Fork was a D-rated district. One thing that did, he said, was qualify the district for special grants and other help, beyond what the state normally provides, so the school could purchase the teaching materials it needed.

Lindsey Popa, a teacher in the district, said that made a difference.

"It gave teachers the tools we needed to be as effective as possible,' she said.

"Before that, we had really good teachers,' Popa said. "But it just took us up to that whole next level.'

"What we see with the 20 percent improvement here is the net over the decrease,' he said. "That's the critical thing.'

Huppenthal said one thing that has spurred academic performance is the state's open enrollment system and variety of options for parents.

Arizona law allows a student to attend any public school in the state that has room.

But there are other forms of competition, including an extensive network of state-funded charter schools as well as various scholarships and vouchers available to pay for private or parochial school.

"If a school doesn't create more value with the resources that it has in the classroom, those students, those parents have 20 other choices,' Huppenthal said.

He was dismissive of a report released Monday by WalletHub which ranked Arizona education 43rd overall in the nation. That study by the financial advice firm looked at a variety of factors ranging from dropout rate and test scores to student-teacher ratio and how often students say they are bullied.

Huppenthal said that was an example of "second-rate research that comes out, that's popularized' and gets a lot of media attention. But he said academic research studies put Arizona above the national average, even if per-pupil funding here is near the bottom.
Contact
Sign up for our e-News Alerts
Most Read
7 days
30 days