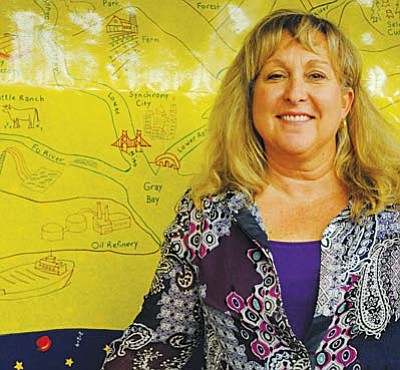 "The teachers have had some instruction, some professional development on differentiated instruction for gifted kids and changing things in a classroom," Fleenor said. "But we really didn't have anything for our gifted kids."

Third through eighth graders can get into the program by scoring a 97 percent or higher on CogAt, a national cognitive abilities test; by exceeding two or more areas of AIMS; or, by teacher recommendation.

"One of the common misconceptions is that any kid that has straight A's is gifted, and that's not necessarily true," Fleenor said. "The research show that gifted kids often get bored and they're not your straight A students sometimes."

Bustya said another assumption people make about gifted kids is that they need harder work.

For example, a child who understands the mechanics of calculating area and perimeter more readily than his or her classmates doesn't need a worksheet with bigger numbers. Bustya said there are lesson plans that allow these concepts to be applied in a creative way.

One that she's thought of implementing is a Snoopy's dog house activity, she said, where students use math to design, and even build, a model.

"They don't want more work," Bustya said. "They want to be challenged and they want interesting work."

The program is broken into five units, starting Sept. 2, with an archeology project called "Dig It" that Bustya modeled after an activity designed by Interact Simulations.

Younger students meet after school on Tuesday, and older students meet Thursdays. In the first unit, the kids work with clay, paper, and other simple craft objects to make artifacts that would be used by their team's fictional culture.

The artifacts will be buried somewhere on campus, and the other team is charged with finding and cracking this culture's invented secrets while using accurate archeological techniques.

"The younger kids will dig up the older kids' stuff, and they'll have to do it correctly," Bustya said. "From what they dig up, they're going to have to try to determine some information about the other kids' culture."

Then comes a section on movie making, another called "Shark Tank, Clarkdale Style," and a month-long unit called the "Da Vinci Egg Drop" before ending the year with a cultural fair.

"Certain kids like certain things," Fleenor said. "You've got enough variety that kids are going to pick out what they want."

Following each unit, Bustya said the program will host a parent night where families can visit and learn about their students' projects.

Bustya said tax dollars can be donated to the gifted program. In line with after-school sports, the program requires a $35 fee for the year, and "waivers are available for students of need."