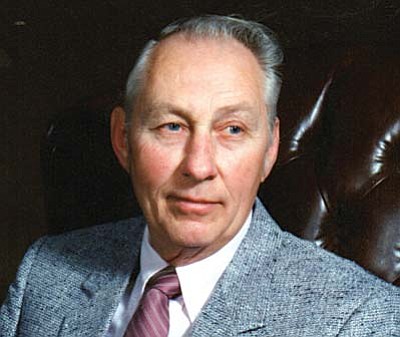 Keith L. Merryfield of Cottonwood passed away on Tuesday, August 5, 2014.

He was 90 years old.  Keith was born on September 11, 1923 in Wild Rose, Wis., to Lester and Lucille (Evans) Merryfield.  He attended school and graduated from Wild Rose High.  He earned a Bronze Star during WWII and worked as a milkman and a machinist.  Keith worked at Mercury Marine in Fondulac, Wis.

After moving to the Verde Valley, Keith volunteered at Verde Valley Medical Center, ultimately giving over 3,000 hours of his time.  He was a member of the Immaculate Conception Catholic Church and enjoyed gardening, hunting and his hospital volunteer work.  He will be sorely missed by his family and friends and his two cats.

Keith was predeceased by his son, Steven Merryfield and his sister, Phyllis Muldenhauer.

Memorial contributions in his name may be made to Immaculate Conception Catholic Church, 700 N. Bill Gray Road, Cottonwood, AZ  86326.