Over time Young has proven he is more than a coach 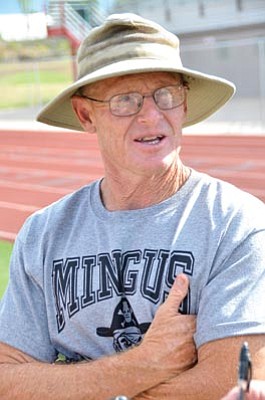 In sports there are some coaches who are only that. Then, there are some who are more. That is the case of Mingus Union High School's Bob Young. Young is currently the head football and baseball coach at Mingus. He has been there for almost 30 years. During that time, he has taught science and physical education. He has also coached football, baseball, softball and basketball.

There is no questioning Young has had an impact on his players' lives.

A past baseball player at Arizona State University, Young knew he wanted to coach because of his passion for athletics.

"My passion my whole life has been playing sports," he said. "I grew up playing football and baseball in high school. That's all I wanted to do. When I got done playing, I figured it was only natural to stay in the game."

While attending ASU, Young played for the legendary Jim Brock. He said that Brock taught him about winning and the will to win.

That has carried over into Young's coaching career. In 1997, the Marauders football team won the state championship. In 2007, the team went undefeated until it lost the state title game.

"He just instilled into our minds that winning was everything," Quesada said. "He was always that guy on the sidelines yelling at you if you needed it. It made us more successful because he demanded so much."

Young's baseball teams have also achieved much on the field. In 2009, after two years away coaching softball, his baseball team won the state championship. In addition, Young was named Arizona high school baseball coach of the year.

"It's easy to win coach of the year when you win state," Young said. "That was a special group of kids."

Quesada said Young came off as a little imitating at first.

"I was intimated first time I met him as a freshman," he said. "But playing under and doing weights with him was great. He was something else."

Another person who experienced Young's leadership is Tony Vocca. Vocca graduated Mingus in 2009. He also played football and baseball under Young. Vocca was the Marauders' starting quarterback when they lost the state title game.

"He's a good motivator," Vocca said. "He's very vocally on how he does it. Back when I was in high school he was on my case about doing stuff because he knew my capabilities. Everyone in this town knows who he is and everyone respects him to the max."

"He pretty much had the same mind sets going into both," Vocca said. "He played college baseball, so he knows what it takes."

Vocca said Young was there for him after losing the state title game.

"That was the first high school football game I lost as a starting quarterback," he said. "After the game he pulled me aside and said, 'we want to get back here next year and you need to get all these guys in the weight room Monday.'"

Young spent time as the junior varsity head coach and a varsity assistant. He became head varsity coach in 1995. He spent two years from 1999 to 2000 at Westwood high school in Mesa. But, he came back and has been at Mingus ever since. Young said the city of Cottonwood is what appeals to him.

"It revolves around the community," Young said. "It's a one-school situation and a lot of the families are real passionate about athletics here. It's been great to be a part of that."

With all the sports he has coached, Young said he doesn't find any of them more enjoyable than the others.

"I'm not going to say I like one more than the others," he said. "I've coached baseball and football the longest, ever since I got out of college. Those are the two I've been around the most, but I enjoyed my time coaching basketball, boys and girls, and coaching softball."

Young was the head girls basketball coach for one season and took them to the final four. He said he was an assistant and agreed to serve one year as head coach when the coach left right before the start of the season.

Young said the best part of being a high school coach is seeing his players mature.

"Watching the kids grow up," he said. "When I was younger I thought about coaching in college and I just didn't like that age group. In the 14-18 year olds, you see so much change in them from freshman to senior year."

Young said to an extent he thinks he helped that process.

"I feel that I least played some role in that in helping them mature and become young adults," he said. "To me that's the neatest thing."

"It's basically training for athletics," he said.

He said he approaches the class the same way he does coaching.

"There's no difference to me," he said. "To me coaching is teaching, so I try to do the exact same thing. Even when I taught science, to be a great teacher I had to have great lesson plans and set goals."

Young said by far his best memory as a coach was winning the championship in 1997.

"That was just a magical season," he said. "We beat a lot of really good teams that were bigger than us in the playoffs. The run we made in '97, that's the run everyone is going to remember."

Young said he also knows the pain and feeling of losing big games. In 2007, at University of Phoenix Stadium, (where the Arizona Cardinals play) the Marauders lost the state championship to Notre Dame (Scottsdale).

"It's hard," Young said. "Everyone is crying, you just try to tell them right now it hurts. But someday, they will look back at that and it will be special that they made it that far."

Throughout all his years, Young credits his wife Pam.

"She has been with me through thick and thin," he said. "She is my biggest supporter."