Jerome is home of Leaverite Society of America 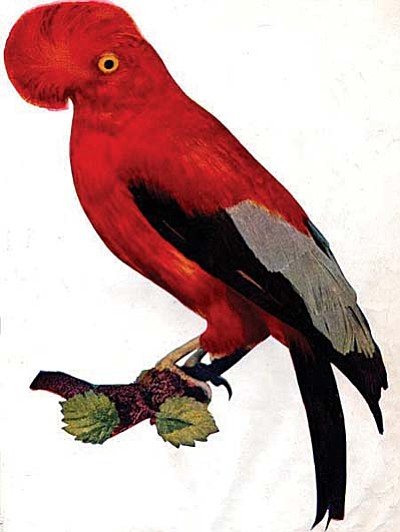 The cock-of-the-rock is the national bird of Peru. Jo van Leeuwen of Jerome, Arizona proposed that the bird be adopted as the mascot for the Leaverite Society of America in Jerome AZ. Image is in the public domain. See: http://www.gutenberg.org/files/30221/30221-h/30221-h.htm From a free e-book, Birds: illustrated by Color Photography first published in 1897 by the Nature Study Publishing Company, Chicago, IL. Book is on-line and the photographs of birds and their descripts are beautiful.

In 1982, I showed an interesting rock that I found near Jerome to the President of the Mingus Gem and Mineral Club. "Could you please tell me what kind of rock this is?"

"Young lady, what you have there is a genuine leaverite."

"What is a leaverite?" I asked.

A smile curved into his lips: "One you leave right there."

In 1985, Dana Driver, Susan Dowling and myself formed the Leaverite Society of America to provide some humorous counter balances to Jerome's contentious politics.

Before two months went by, The Leaverite Society had 75 paying members, most of them Jeromans. All had a major love affair with rocks. Rocks were fun. They weren't jealous or possessive, weren't political, and didn't talk back! The ideal companion for us leaverite philanderers!

'Leave No Stone Unturned,' was the first motto of the Leaverite Society. "Hot Rocks or No Rocks at All" was the second. After the disastrous pot bust of 1985, which led to the arrest of sixteen Jeromans, including two members of the Jerome Town Council, a Leaverite Society member who wished to remain anonymous proposed a third motto: "Everybody Must Get Stoned."

At our first official meeting, Georgia O'Keefe was given an honorary membership. Once a week she arranged her living room around a special rock.

The Leaverite Society made commemorative hats, held potlucks, complete with rock scavenger hunts, and published two newsletters. The second issue featured a love story by Tikky Trachyte (the inimitable Katie Lee), and an article by Ayers Rock (Joe van Leeuwen's moniker) on the Cock-of-the-Rock, a bird that inhabits the rocky ledges and shallow caves of South and Central America.

It also included a fiendish British-type crossword puzzle by Whitecliff (Dana Driver's Dad) called "100 Arabs-Egyptian Rock Group." British crosswords are known for containing clues that are both straightforward and cryptic. I couldn't even guess the straightforward answers to "Seek complaint in first-class rodent," "Utah resident hunting antelope in Nepal," or "He takes his half of the road out of the side." I did not know one Leaverite Society member who solved the puzzle.

In the seventies and eighties, dozens of world-renowned geologists roamed the area around Jerome AZ to figure out when and how the super rich massive sulfide ore bodies formed. They're the ones that turned Jerome into a fabled and very wealthy copper mining city.

Jerome Arizona's ore bodies are called massive sulfides not just because they are large (some geologists describe roughly shaped spheres that can extend a mile or more down into the earth), but because they are so dense with precious ores, like copper, zinc, gold and silver. The official definition massive sulfide ore bodies are those contain more than 50% minerals to a ton of rock.

The 'when and how' answers that geologists came up with are straightforward-the massive sulfide ore bodies are 1.738 years billion years old, and were formed in hot springs vents in deep undersea volcanoes virtually at the same time as the large undersea volcano that hosted them-the copper colored Cleopatra formation that dominates views when people look up at Jerome from the Verde Valley.

Incredibly more convoluted are answers to the questions about how the ore bodies remained intact over immense and varied cataclysms over such a long period of time and the dynamic processes that led to a tip of the United Verde ore body being exposed to the air, which enabled its discovery. The geology of the Jerome area is a giant, intricate puzzle with quite a few missing pieces.

According to Verde Valley geologist Paul Handverger, "The Jerome area is one of the most interesting geologic phenomenons of North America. Much more interesting than the big ditch," (the Grand Canyon.)

One could earn a PhD in geology by studying just this small patch of real estate.

During his quest for gold in Northern, Nevada, John McNerney found a new method for its discovery-and a new use for gold. He designed a mercury detector that used gold film sensors to analyze minute quantities of vapor rising above the soil deeply buried gold deposits. John founded Jerome Instrument Corporation in 1979 to manufacture these detectors.

One irony: although some geologists bought a few mercury analyzers as a prospecting tool, the major market turned out to be the United States Navy. Its submarines needed to instantly know when mercury based instrumentation broke and fouled the air. Mercury is toxic to the nervous system and can turn people into mad hatters.

As an aside, John's wife Iris was convinced all Jeromans were wacky because of the mercury that exists in the soils underneath Jerome's feet.

The second irony is that John is now avidly against the opening of new gold mines because of their environmental destructiveness. He helped lead a major movement in Todos Santos, Mexico against a mine that would have likely fouled an area aquifer. 'Aqua vale mas que oro' was their rallying cry. (Water is worth more than gold).

While geologists were combing the hills, perhaps many as forty people in Jerome were jewelers, carvers and sculptors. Dana Driver and Susan Dowling, two founders of the Leaverite Society were jewelers. I just liked leaverites. (My husband liked to build retaining walls on our property.)

For a few years, Dana Driver, president of the Leaverite Society, became fascinated with beach stone. She polished them, incised them with gold and silver, made them into pendants, flowers and insects. www.Danarocks.com. Dana is among artists that continuously reinvent themselves and stretch artistic boundaries. A few years after her fascination with beach stone, she got into making fine jewelry from bottle caps, tin cans and bits of rusty metal.

I've always marveled that Bob Hall, who makes some of the most delicate hand-faceted bead necklaces, has also built some of Jerome's largest hand-stacked retaining walls, including the wall behind the Jerome fire station and the wall flanking the basketball court, adjacent to the sliding jail. Retaining walls are Jerome AZ's most overlooked architectural treasure, even though hundreds are in view every day.

Diane Sward Rapaport is the author of Home Sweet Jerome: Death and Rebirth of Arizona's Richest Copper Mining City. The book is widely available in the Verde Valley and Jerome. www.homesweetjerome.net. The stories for "Annals of Jerome" are not part of the book.