Aftershock runners give back to community 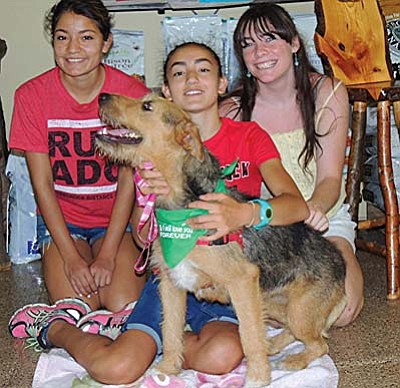 Having returned to the Verde Valley after college "because it's a small town and there are more opportunities to impact the community," Swenson has partnered with Verde Valley Humane Society Volunteer Coordinator Leslie Stevens to enable his young runners to do exactly that.

Volunteer Coordinator Stevens states that Coach Swenson and the girls "have helped fill a very big need," noting that "every single effort helps!"

Coach Swenson feels that the humane society service performed by his team was a top priority. "We even pushed our Running Camp back several hours in order to go to the Humane Society Birthday Bash fundraiser.

Noting that team members have been able to volunteer consistently during the summer, Coach Swenson described the fulfillment experienced by the girls "when we make connections to specific dogs, and those particular dogs recognize us when we come."

In addition to volunteering at the Humane Society, Aftershock girls also volunteered at the Old Town Mission, providing special help with the Backpack Program.

Having coached some team members for five years, Coach Swenson praises his current runners as being the "most dedicated group I've ever coached in my entire life," adding, "In fact I would trust any one of them to be my assistant coaches. They have the knowledge, the work ethic, and the passion to do it."

Runner Penny Fenn, a junior at Mingus High School, says that Aftershock "is the best thing in my life. I love to run. I couldn't ask for a better coach." Fenn, along with Allyson and Karen Arellano, participated in the USA Track and Field Competition at Occidental College in North Los Angeles last spring. There, they competed with athletes from all over California. The team completed in events such as the 800 meter, 1500 meters, and the 3000 meter steeplechase, exceeding their own personal bets in several events.

Acting as the team's liaison for college prospects, Coach Swenson is proud that some team members have already been contacted by colleges nationwide, noting "The interest from colleges really motivates them." Additional motivation comes from experiences such as having twice met Ryan Hall, Olympic marathoner. In fact, Aftershock is actually a subset of USA Track and Field, which is the venue for the USA Olympic teams.

Her brother, 13-year old Josh Reilly, is also on Aftershock, and, last weekend, travelled with his father to Ohio, to participate in a national triathlon even.

Any youth or parent who desires further information abut Aftershock should contact Coach Micah Swenson at 928-274-6789.

Anyone interested in learning more about volunteering at the Humane Society should contact Volunteer Coordinator Leslie Stevens at 928-300-2537.