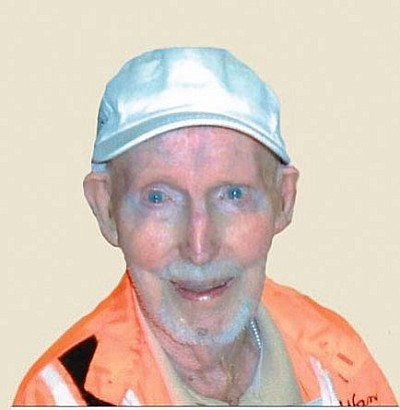 Bob C. Wann of Cottonwood passed away on Saturday, August 16, 2014. He was 90 years old. Bob was born on October 3, 1923 in Chandler, AZ to Thomas and Hattie Jacks Wann. He attended and graduated from Phoenix Union High School before joining the Army to serve his country in WWII. Later Bob became a truck driver, eventually retiring from Yellow Freight as a member of their 4 Million Mile Club, meaning he had no accidents in his time driving for them.

Bob was a member of the One in Christ Church and a Christian who loved the Lord. He loved watching his grandsons play sports and was known to travel all over the United States to see them play. Bob was known as "Grandpa Bob" all over town to sweet and caring waitresses, Cottonwood Village staff and by many faithful friends. Grandpa Bob wanted to hug everyone, and everyone who visited his room at Cottonwood Village was required to take a Dove chocolate.

Bob was preceded in death by his parents, Thomas and Hattie; his brothers, Erwin Wann, Glen Wann and Bill Wann, and his sisters, Mildred Wann and Garna Joiner. He is survived by his wife of 20 years, Eunie Wann of Cottonwood; his daughters, Cindy (Bob) Rawlinson of Cottonwood, Jean (Robert) Wilson of Cottonwood and Carolyn Crosson of Chandler, AZ; 9 grandchildren and 21 great-grandchildren.