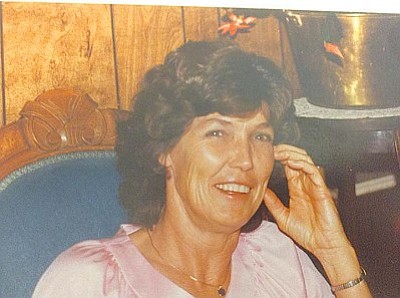 Wanda Sue Baird passed away in her home in Cornville, AZ, Aug. 17, 2014, after a long struggle with lung disease.

She married Calvert Smith from Pinetop, AZ & had her first daughter Deborah (Mills). They lived in Pinetop for a short time. She was divorced in 1957.

She later met Orville (Parky) Lyman Baird and married him on Oct. 10, 1959. They had three children. They moved to Cornville, AZ in 1977. She then worked in health care at the Cottonwood, AZ hospital, & retired after 25 years.

She was preceded in death by son, William (Billy) Baird, & husband Orville (Parky).