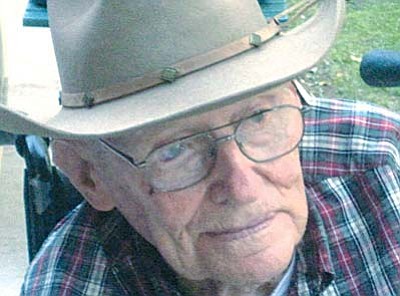 Eugene Melville Waldroup, 94 of Cottonwood, died on August 21, 2014. He was born on December 11, 1919, at Fort Verde in Camp Verde. He was the son of Jesse Franklin and Enone (Montgomery) Waldroup. He attended grade school at Stoneman Lake and Beaver Creek Schools and graduated high school in Clemenceau.

Eugene spent 28 years working for Fred Harvey as a mule wrangler/black smith guiding tourists down the Grand Canyon. After retirement, he spent 25 years in Williams, some as a ranch hand at a local ranch, before moving to Cottonwood.

He has one cousin, Margaret Derrick of Cornville and many second cousins.

A graveside service will be held at Middle Verde Cemetery in Camp Verde on Wednesday, August 27, 2014 at 10:00am.