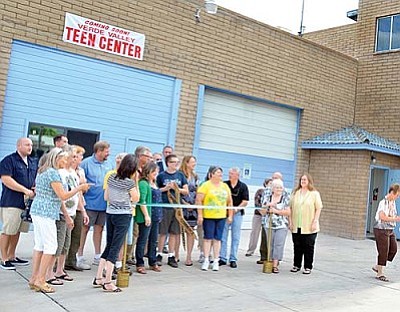 COTTONWOOD -- A number of hard-working volunteers turned out to celebrate the ribbon cutting for the newly opened Verde Valley Teen Center.

Cottonwood Mayor Diane Joens said the idea began when Chamber Director Lana Tolleson facilitated a meeting with the group For Our City to talk about what was needed in Cottonwood and the youth center got the most votes.

The mayor asked the gathering of the core team to raise their hands. There were a lot of people that did a lot of work the past two to three years.

Allan Marx, who now leads the organization, thanked the city for loaning the former Fire Department building, thanked the council and mayor and contractor Bob Backus who organized building workers to spruce up the building so it can handle enthusiastic kids.

One woman cheered, "We are going to have a Kids at Hope facility," celebrating the philosophy that "every child can succeed, no exceptions!'

Tolleson said, "This is something we have needed for a long time."

With that, Jarrett Jauregui, an 8th grader, did the honors, wielding the ceremonial scissors and the ribbon was cut.

The three former fire equipment bays open up with two remaining mechanical doors to the street and the Cottonwood Middle School opposite.

Workers made a number of changes to the existing building, removing some walls, building other walls, and covering equipment where needed. They made changes to satisfy building code and created a second door as an emergency exit. There was no cooler, so that was added and the heater was moved.

The front bays include a pool table, ping pong and foos ball as well as a large screen TV and DVD equipment. There are tables for games and couches

Behind the front bays is a craft and game room with another TV. There is another room with couches, a computer room with equipment donated by the Verde Valley Computer Club and then a kitchen and office. Bob Backus says he can't even begin to know how many hours were donated, but at least 100. Value of the upgrade is probably $15,000 to $18,000.

Cheri Marx says the Teen Center still needs file cabinets for the office and something like a Wii, Nintendo or X-Box game set up. Games are needed for the craft room. Crafting items are also needed as well as computer paper and supplies.

Cheri, who handles fund raising, says tables will be set up at Verde River Days in September and the Fall Festival at the Moose Lodge Oct. 4. And of course, volunteers are always needed.

The Teen Center will be open from 3-9 p.m. Thursday, Friday and Saturday at first and, with more volunteers, hours will be expanded in the future.