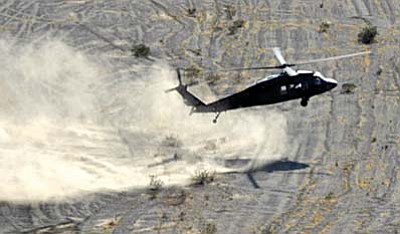 CAMP VERDE - A view of the ruins at Montezuma Castle from the air sounds like a great tour - but only if the flight keeps its distance.

Whether that has happened at The Castle was a matter of dispute last week, but it is a reminder of the flight rules in place around parks and monuments within the National Park Service.

Park Superintendent Dorothy FireCloud had concerns when she first saw advertisements for helicopter flights to take tourists over the national park she oversees. Those worries seemed to play out subsequently as rangers reported flights coming close to the ancient cliff dwellings.

"They have to be 500 feet from the highest point," FireCloud said Thursday. "This has been kind of the issue we were concerned about."

The proximity of a hovering helicopter brings up issues of rotor wash and rotor vortices, neither of which are welcome around fragile ruins. Rotor wash (or downwash) is high-velocity air under the helicopter that is more intense closer to the ground. The turbulence can then spread out to the sides of the helicopter.

The vibration from the rotor blades can loosen rocks at the structure and also disturb wildlife, FireCloud said.

Helicopter tours are popular around the red rock country of Sedona as well as public lands across the country. The Federal Aviation Administration put rules in place regarding tourism flyovers, mostly to mitigate noise. Downwash is not address as much in studies, but the motives of protection are the same.

The new tours that offer a unique perspective of Montezuma Castle are part of new packages offered at Cliff Castle Casino Hotel in partnership with Red Rock Helicopters, according to casino Director of Marking Gene Sitkowski. Sticking to the flight rules, he said, is in their best interest.

Wednesday evening, Aug. 20, it was not only rangers but also a resident who spotted a tourism helicopter that they described as far too close to the monument.

Three rangers were monitoring bats after hours when a chopper flew down and hovered over trees in front of the castle, according to the report the rangers made to FireCloud. They told her it circled around and came back before leaving. They were standing on the sidewalk in front of the castle and could read the tail number on the helicopter. That, too, they reported to FireCloud and submitted a photograph.

With that information, the superintendent can report the incident to the FAA.

Out for a run along Montezuma Castle Highway at the same time on Wednesday, Matt Malloy also saw the helicopter hovering near the national monument. As a former Park Service ranger, he was familiar with general flight rules around the parks and perceived that the chopper was too close.

Malloy is also an award-winning science teacher at Camp Verde High School. He said he has experienced the "pressure waves" or rotor wash from helicopter blades at Tonto Basin, where it was part of his job to identify and turn in helicopters violating the flight restrictions.

"It feels like a repeated push that will resonate to destabilize the structure," Malloy stated.

He ran after the helicopter as it landed in the casino parking lot. He watched two happy tourists leave the vehicle and then he spoke to the pilot about the park flight rules. He also took down the tail number of the helicopter. He contacted the National Park Service to report the incident.

After complaints about the incident came to light, casino officials spoke with the helicopter company, reaffirming that they were following flight rules and the helicopter did not come as close to The Castle as deemed by the rangers and the teacher.

Owners of Red Rock Helicopters could not be reached by press time.