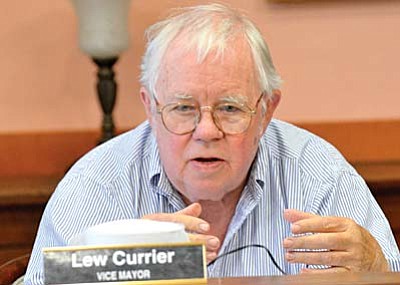 As of noon Wednesday, Lew Currier was the top vote-getter in the Jerome municipal primary. VVN/Vyto Starinskas

Jerome voters decisively struck down a vacation rentals ordinance by a 3-1 margin Tuesday, according to unofficial Yavapai County election results.

"Things are still up in the air," Gallagher said. "We'll have a better idea in a couple of days, but we really can't say right now."

The "complicated" process, she said, starts with dividing the number of ballots cast by the number of council seats. To be elected straight out of the primary, a candidate would need to earn 50 percent of that number, plus one.

The votes candidates have do not represent the total number of ballots cast. A person may cast a ballot without voting for a single council member, Gallagher said.

About 20 ballots were collected Tuesday night and have yet to be counted, Gallagher said. So far in the Jerome council race, the standings are separated by single digits.

"That could change things," Gallagher said.

Vice-Mayor Lew Currier was the top vote-getter as of noon Wednesday. He'd been vocal about his opposition to the vacation rentals ordinance in the months leading up to the 3-2 council vote that passed it.

He said he won't know for a while whether he met the 50-percent-plus-one threshold, but that either way, the next council will likely deal with vacation rentals.

"I want to see where the rest of the council is on that issue," he said. "I'm very concerned. I don't know how we're going to move forward on this one."

From the beginning, he said, he was concerned Ordinance 405 would bring the town to court.

"I don't know whether the standing of the previous council's action will affect the future defense or attack on the code," Currier said. "It's all very foggy."

Douglas Freund worked to get Ordinance 405 referred to the voters, collecting 111 resident signatures. He was in second place Wednesday afternoon with 72 votes, followed by Jerome native Christina Barber, who earned 65 votes.

Steve Pontious and Frank Vander Horst were the only two challengers who supported Ordinance 405. They landed in eighth and last place, respectively, with incumbents Randall Hunt and longtime councilwoman Anne Bassett between them.

Hunt had initially collaborated with Phinney to create a vacation rentals ordinance, but said during an Aug. 13 Jerome forum that he ended up voting against the law's final form.

"It got reworked and so forth, and as it turned out, I was experienced in how sausage was made, and I didn't particularly care for how it tasted," he said.