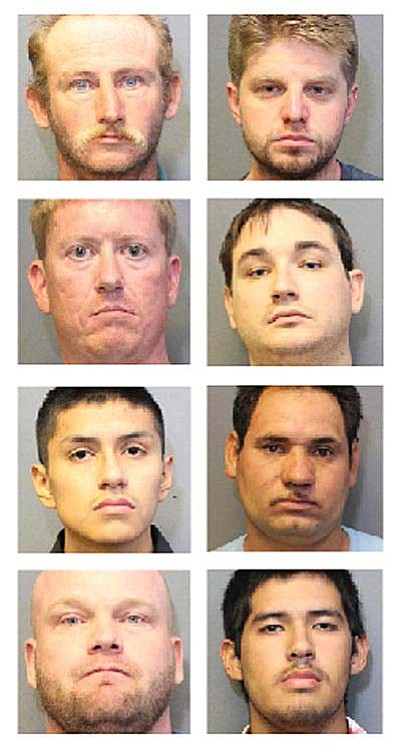 YAVAPAI COUNTY--The Yavapai Sheriff's Office joined with several law agencies, Monday and Tuesday, to combat human trafficking in Yavapai County. The Sheriff's Office along with Prescott PD, Prescott Valley PD, Cottonwood PD, DPS, Department of Homeland Security/ICE, GITEM, Partners Against Narcotics Trafficking (PANT), Camp Verde Marshal's Office and FBI, conducted an operation to target the buyers of child prostitutes. Human trafficking is the second most prolific crime in the world, second only to narcotics trafficking in terms of revenue generated. The victims are often teenaged girls forced to engage in repeated sexual assaults for the profit of a "pimp."

This operation targeted buyers who would willingly hire underage prostitutes for sexual gratification. After the suspects made contact in response to a notice from an Internet publication, they made arrangements to meet the underage girls in a specific Yavapai County motel room. During two days, the team of law officers apprehended the men who, despite knowing that the girls were children, were willing to exploit them for paid sex.

Seven adults were arrested after they requested sex acts and made payment in the hotel room. Another suspect, 37-year-old Walter Christopher, was arrested at his home in Flagstaff Thursday after a search warrant was served. Christopher is a registered sex offender on probation in Coconino County.

Detectives documented Christopher's arrangements for specific sex and his agreement to meet the "underage girls" at the motel. He admitted driving to the hotel but did not follow through with the plan. He was charged with 2-counts of engaging in prostitution with a minor and booked at the Camp Verde Detention Center. Bond has not been set.

The other seven suspects were booked on at least one count of engaging in prostitution with a minor. They include 34-year-old Donald Eden of Black Canyon City, 22-year-old Sean Holden from Flagstaff, 23-year-old David Flint from Corona, California, and 34-year-old Isaac Turincio-Villegas from Cottonwood. All are held on a $20,000 bond. 25-year-old Martin Zazueta-Suarez of Cottonwood remains in-custody on a $10,000 bond. 19-year-old Israel Rodriguez of Flagstaff who was released on a $20,000 bond, 25-year-old Michael Metzner from Cottonwood was booked on one count of child prostitution and remains in-custody on a $ 10,000 bond. All in-custody suspects are held at the Camp Verde Detention Center.

After a similar operation in April of this year, anyone who thinks such acts can go unnoticed should think twice before making arrangements to meet a prostitute in Yavapai County.

According to Sheriff Scott Mascher, "I will continue to make these types of operations a priority for the Yavapai County Sheriff's Office because the goal of protecting our children from sexual predators must continue. I would like to thank all the assisting agencies for their support and participation in the investigation. On behalf of my fellow law enforcement partners, it is my hope these arrests send a message that preying on our children will not be tolerated in this County."