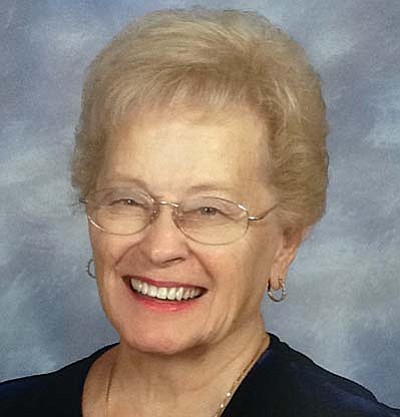 Anita Elienora Bennett, age 81, passed away peacefully at her home in Cottonwood, Arizona, on Wednesday, November 26, 2014, and was called to her heavenly home with the Lord.

Anita was born on August 22, 1933, to Evert E. and Hilja (Marjamaa) Lind in St. Paul Park, Minnesota, and was the second eldest of eight sisters.

On November 2, 1961, she was united in marriage to Harry Paulson, and the couple lived in Braham, Minnesota. They later moved to Cottonwood, Arizona, where they owned and operated the Buckaroo Bar (now Kactus Kate's) in Old Town Cottonwood. They moved back to Minnesota for a short time and there Anita completed cosmetology school and received her cosmetology license. She had the opportunity to purchase a beauty shop in Old Town Cottonwood and the couple moved back to Arizona.

Anita owned and operated Anita's Kachina Beauty Shop for many years and was well known in the area.

On May 16, 1993, she married Everett Bennett and they made their home in Cottonwood. Everett passed away in October 2003. After Everett's passing she moved to Pine Shadows in Cottonwood, where she had resided since.

Anita devoted much of her time as a member and volunteer of the Loyal Order of the Moose and the VFW Post 7400 Auxiliary. She also did volunteer work at the Clemenceau Museum. She was an active member of the Verde Valley Christian Church in Cottonwood.

Anita was a genuine loving, caring and kindhearted person who had a real zest for life. Her hobbies included bowling, camping, fishing, gardening, reading, dancing, doing crafts, and playing cards. She loved to travel, and enjoyed several trips across the United States in a car or her RV. She also enjoyed cruising and visited Alaska, Mexico, the Panama Canal, Hawaii, and the Caribbean. She loved to visit with family and friends, and enjoyed going to lunch and outings with her girlfriends. Most of all, Anita adored her family, and she treasured her seven sisters.

She was preceded in death by her parents, her husbands, children Donna and Ronald Sutton, and sisters LaVonne Cullifer, Rochelle Johnson, Jolyne Koski, Sylvia Lindgren, and Shirley Mitchell.

A memorial service will be held Thursday, December 4, at 11 a.m. at the VFW Post 7400 in Cottonwood with lunch provided by the VFW Ladies Auxiliary following the service.

Interment will be at Bethany Lutheran Cemetery in Menahga, Minnesota, in the spring.

Arrangements by Westcott Funeral Home in Cottonwood. An online guest book is available to sign at www.westcottfuneralhome.com.