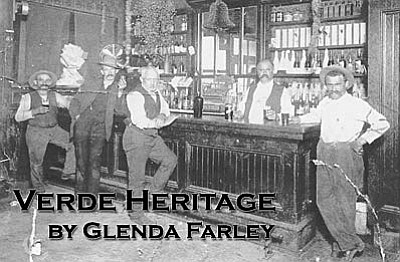 Prescott: "The train of Mr. Jno. Hance is in town, loading lumber and Commissary stores for Camp Verde."

"A. Jackson, the pioneer of upper Oak Creek, has taken the first hives of bees into that section, which is one of the best farming and grazing localities in the country."

"FIRE ON VERDE, etc. --- One of our Verde correspondents informs us, that on the evening of November 29th Messrs. Estelle & Frier sustained quite a loss by having their dwelling house, furniture and about three tons on hay consumed by fire."

"The same correspondent informs us that there is plenty of work down there for a good corn shelling machine. Farmers ask 4 cents per pound for their corn; 4 1/2 for barley; 6 cents for Irish potatoes, and 20 cents for sweet potatoes. River filled with fish; hills with deer."

"Our Verde correspondent sends us the following items for which we tender thanks:"

"A horse race is to come off on Christmas day between two horses belonging to Campbell and Steadman for $100 --- a side."

"Messrs. Davis, Montague, Brown, Elliott and Day, returned recently from Baker's Butte; on the new Camp Apache road, where they had been hunting, bringing with them 80 deer and quite a number of turkies, &c."

"A new school house has been erected and a splendid school is in full blast."

"Parson Groves has permanently located himself in the Verde Valley and will preach to the residents and others who may feel inclined to visit his sanctuary."

"Farmers are busy plowing, preparatory to planting a large crop the coming season. A large pumpkin was raised by one of the farmers of the Valley, weighing over 100 lbs."

"A great many thefts have been committed of late and still no exertions have been made on the part of the civil officers to arrest and punish the offenders. ... W. C."