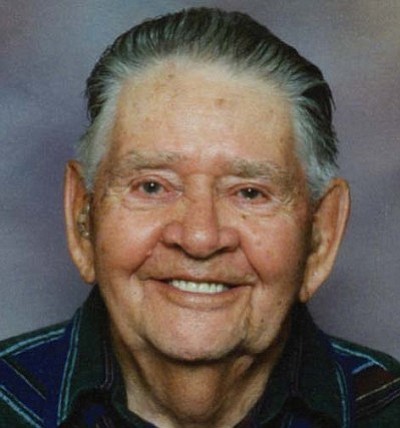 Lloyd Elbert Kemerling of Cottonwood passed away on Sunday, December 7, 2014, at home with his family by his side. He was 98 years old.

Lloyd was born on the family farm a few miles west of Kewanee, IL on November 13, 1916 to Mones Elbert and Hannah Elizabeth (Johnson) Kemerling. He attended a one-room school house through the eighth grade before going to work on the farm.

Lloyd farmed for a number of years on the home place. The family moved into Kewanee in 1940. He went to work for a short time at an oil station, and later, Lloyd worked for 23 years for the Goodyear Tire and Rubber Company in Kewanee.

He was married on September 22, 1946 to Mary Margarette Polansky in Kewanee. In 1969 he and his family moved to Cottonwood, AZ where they ran the Dairy Queen for over 6 years. He then worked part-time for the Gambles store in Cottonwood. He retired in 1980 and went on to enjoy many years of his favorite things, like gardening and going fishing.

Lloyd is survived by his daughter, Marie Kemerling and the love of her life, Dyson Boatman. He is also survived by many cousins, nieces and nephews. He was preceded in death by his parents, his wife of 51 years, Mary, their two infant children, Cynthia Ann and LeRoy Elbert and two sisters, Irene Edwards and Ruby Otley.

A memorial service is being held on Sunday, December 14, 2014 at the Seventh Day Adventist Church, located in Cottonwood at the corner of Willard St. and Mingus Ave., at 2 PM. Inurnment will be in Galva, Illinois.