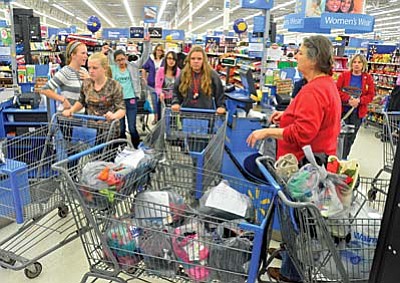 Marilyn Caneloupe and her Cottonwood Middle School students purchase clothing for the needy at Walmart on Wednesday. VVN/Vyto Starinskas

NJHS members shopped for the outfits on Wednesday, and were responsible for staying within a budget. They work with Catholic Charities, the organization that provides the list of names and sizes.

"We were at Walmart, and we finally have that down to a science," Canteloupe said.

Previous years of the fundraiser have been slightly chaotic, organizing specific items for each recipient. As the group checks out, Canteloupe said each outfit is rung up one at a time, placed in its own bag, and labeled with the child's name.

Aside from the service aspect of it, Canteloupe said this particular project stands out because NJHS members get to help out younger children while also learning valuable life skills.

"They have to figure out how much they're spending; they really work hard to get the most bang for their buck," she said.

"They really put a lot of thought into getting the outfits, and looking to see that maybe they can't buy a $40 jacket."

The funds raised worked out to about $50 per child, and NJHS members each shopped for two or three kids. Canteloupe said the middle schoolers puzzle over choices, prices and combinations as they shop.