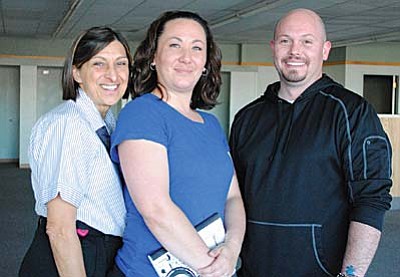 COTTONWOOD - The Adopt for Life Paw Boutique moved into its new location in the Food City shopping center Tuesday, starting a new rent-paying era for the shelter's fundraising arm.

The Paw Boutique had previously been located in a city-owned building, coming with a yearly rent of $1. After the city sold the building, board president Grace Lahr said they needed a new place to house what can account for more than half of the shelter's yearly revenue.

When Lahr took over as president of the board in April of last year, the shelter was more than $70,000 in debt.

Connecting with the community on social media has allowed residents to feel ownership of the shelter. The Adopt for Life Facebook page has 825 likes, a number that Lahr said goes up every week.

Tessa Unwin posts pictures of adopted dogs and their new families, animal-related memes and feel-good pet photos to the page, and even uses it to ask for things the shelter needs right away.

"She's getting in that contact with people, making people aware that we are there and we're there for a purpose," Lahr said. "Our purpose is to help those that can't help themselves."

A new volunteer coordinator helps make each person donating time feel part of what goes on. Vice President John McTurk said a line of communication has developed that lets staff and volunteers take part in how the shelter runs.

"That communication has become so much different and so much more positive that it helps promote that ownership," McTurk said.

Euthanizations have also decreased, with a record 932 animals adopted and 40 volunteers putting in more than 12,000 hours in 2013.

The medical needs of the animals have been supplemented by the Jerome Humane Society, and three (instead of one) veterinarians donate time.

Five community members named the shelter in a trust in the past year, and residents have committed to making monthly donations.

Local businesses have also responded to the shelter's needs. Cottonwood's Pet Sense opened in September, and has since adopted out more than 50 cats in cooperation with Adopt for Life. The store collected wish list items in a 50-gallon drum over the Christmas months, which Lahr said had to be emptied three times.

"That's thousands of dollars for us," Lahr said.