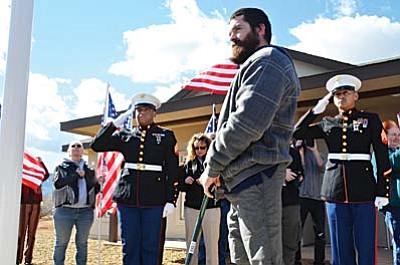 Marine Sgt. Jordan Maynard stands in front of his completed home, surrounded by US Armed Forces Veterans, Marine Corp soldiers and Homes for Our Troops personnel on Saturday in Cottonwood.

Homes for Our Troops turned over the keys on the building project for Marine Sgt. Jordan Maynard and family on Saturday, February 1, on Anica Lane in Cottonwood. Homes for Our Troops works to build new homes for military personnel with a floor plan and features that accommodate the physiology of the homeowner. Sgt. Maynard was leading a foot patrol during his second deployment in Afghanistan in 2011 when he stepped on an Improvised Explosive Device, resulting in the amputation of both legs above the knee. During the presentation ceremony Veterans Liaison Larry Gill thanked the Cottonwood community for raising $26,000 towards the construction of the next Homes for Our Troops project - the most money raised by any community so far. The Maynard home was the 161st built by the organization. Many veterans attended the ceremony as well as local first responders and a Marine Corp Color Guard. After a host of speakers, including Mayor Diane Joens, VFW Post 7400 Commander Ron Luce and, of course, Jordan Maynard, Larry Gill presented keys to the home to Jordan, his wife Jennifer and son Jay. VVN/Jon Pelletier