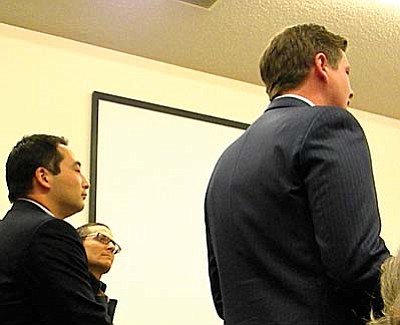 COTTONWOOD - The Cottonwood City Council delayed for two weeks consideration of the sale of the old Cottonwood Recreation building to a group that intends to build a microbrewery, restaurant and brewpub in the building.

The partnership that calls itself The Cottonwood Brewing Company LLC was the only one of 10 original applicants that followed up with a complete Request for Proposal submission. While the original appraisal put the value at $225,000, the city said the fair market value of the property would be $150,000 after the city re-surveyed the land to retain some of the property. The partners are also proposing to invest $1.2 million into the building, equipment and development. They have offered $100,000 for the property.

The three partners were on hand for the Tuesday meeting: Robert D. Conlin Jr., operator of Bobby D's Barbeque and the English Kitchen in Jerome, Suehiko Ono, and Richard Julian Wrubel. Both Ono and Wrubel are in real estate with links to Diamond Resorts in Sedona. Ono is an attorney and Wrubel a mortgage broker.

The three will invest capital in the operation and develop the plan. According to the proposal, Conlin will become the general manager. Scott Buckley of Clarkdale's Main Street Café and Pizzeria is proposed to operate the restaurant. The operation's beer consultant will be Mother Road Brewing Company of Flagstaff.

Wrubel opened by saying that "Cottonwood is much 'cooler' than Sedona for opportunity and excitement." He also brings an architectural background to the mix.

Ono told the council, he moved from the East Coast five years ago. He said the proposed development would meet the city standards. He noted that the architectural drawings were merely "representational."

Councilman Terence Pratt hailed the proposal, "I love the idea; it is an element that we have needed to add to the community ambiance."

Tom Pender, who operates the successful Rendezvous in Old Town next door, was cautions. He said that, while a supporter of Old Town development, parking is still a problem on the south end of Main. He said he would like to see the city get the maximum value and sustainability, not to be taken from other properties.

Wrubel said the brewpub would bring new consumers to the Old Town area.

City Attorney Steve Horton said the additional time would give the city the opportunity to talk with the partners to make sure that the plans conform to the city's RFP and the development is built as proposed.