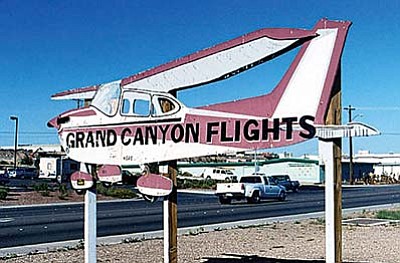 Air tour operators flew more than 55,000 trips over the Grand Canyon in 2012, making it a $2 million a year industry by one estimate. (Photo by Roadsidepictures via flickr/Creative Commons)

WASHINGTON - The Federal Aviation Administration said it will allow 1,721 additional flights through Grand Canyon National Park this year, with one catch: The tour flights will have to use quiet-aircraft technology.

The extra flights, announced Monday, are part of a law aimed at encouraging a transition to quieter aircraft over public lands.

While some lawmakers hailed the action, environmental groups said the technology is not quiet and that it will not achieve the law's stated goal of restoring the park's natural quiet.

"The so-called quiet technology is not quiet," said Sandy Bahr, director of the Sierra Club's Grand Canyon Chapter. "It's less noisy, but it's not quiet."

"It's a ridiculous way to treat a national park, where people come to hear the natural sounds, to hear the water flow, ... not to have it drowned out by aircraft," she added.

But Sen. John McCain, R-Ariz., praised the additional flights as "an important first step" toward promoting the use of quiet-aircraft technology.

"Air tours, and the unique sightseeing experience they provide, are an important part of the northern Arizona economy," McCain said in a prepared statement Wednesday.

That was echoed Thursday by Rep. Ann Kirkpatrick, D-Flagstaff, who said creating incentives for quiet-technology flights in the Grand Canyon "just makes sense."

"The Canyon is a treasure that must be protected, both as a natural wonder and an economic driver," Kirkpatrick said in a prepared statement. "Its tourism sustains thousands of jobs and supports northern Arizona's economy, so we need to ensure these visitors enjoy the best of the Grand Canyon - in sights and sounds."

The changes come as part of the Moving Ahead for Progress in the 21st Century, or MAP-21, Act. It outlines steps for the FAA, in partnership with the National Park Service, to encourage quiet aircraft technology among air tour companies.

Under MAP-21, the Grand Canyon National Park offered to lower the per-flight fee that air tour operators pay, from $25 for a regular aircraft to $20 if they switch to quiet aircraft technology. The fee change took effect Jan. 1, said park spokeswoman Maureen Oltrogge.

She pointed to the Dragon and Zuni Point corridors, two of the most popular for air tours, as an example: With flights taking off about every 90 seconds, she said, the 49 new flights that would be added in those corridors over a year is not significant.

The long-term goal is to reduce the noise impact on the Grand Canyon over the next 15 years, she said. But some in Arizona question whether the quiet technology standards can do that.

Flagstaff resident Jim McCarthy, who did a master's thesis at Arizona State University on noise pollution in the Grand Canyon, said air tour companies are "gaming the park." Because the quiet technology is defined by noise per seat, aircraft can be noisier as long as they hold more people, he said.

"It can be completely counterproductive," he said. "It just shows you where their (FAA) priorities are."

He said the air tourism industry around the Grand Canyon - which he said was worth $2 million last year - has used "quiet technology" to protect its "money cow."

But an FAA spokesman said in an email that even though the agency has increased the number of flights that could take place this year, the air tour industry has not operated at capacity in recent years.

Ian Gregor said the FAA authorized about 90,000 flights in 2012, the most recent year for which numbers were available, but only 55,185 commercial air tours were actually flown that year.