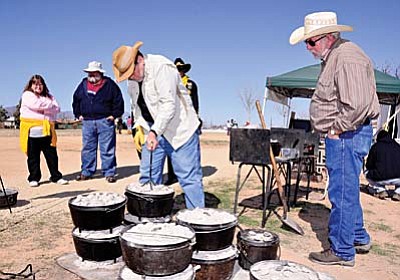 The name Buffalo Soldiers was first given to the 'Negro Cavalry' by the Native American tribes that they battled in the 1860s. Buffalo Soldiers eventually became interchangeable with the African-American regiments of the time.

On Feb. 15, Fort Verde State Historic Park will celebrate the Buffalo Soldiers with re-enactors dressed in period-appropriate replica uniforms and equipment issued by the U.S. Army during the 1870s Indian War period.

Since February is African American Heritage Month, "we felt it was appropriate to create an event that would pay tribute to those Buffalo Soldiers who served at Fort Verde," says Fort Verde Park Manager Sheila Stubler.

Hold the Fort company cook Bill Stafford and his partner Bob Tener will conduct a Dutch oven cooking demonstration. Stafford and Tener will cook a southern-style lunch of black-eyed peas, grits and cornbread with peach cobbler for dessert. Lunch is available for a suggested donation, Stubler also said.

"This way of cooking has been around for hundreds of years this is our way of giving back to our volunteers, by preparing a nice hot meal so they can just show up and do what they do best, tell their stories to the public," Stubler said.

"Dutch oven cooking is our hobby," Tener says. "Being able to prepare these meals on the fort's grounds using coals gives me great satisfaction."

Seven years ago, Stafford and Tener began doing the Dutch oven cooking demonstrations for each of Fort Verde's annual events.

Stafford and Tener will also be cooking up a special breakfast and dinner for the volunteers, with Mary's biscuits, grits and a rib stickin' breakfast casserole served for breakfast, and snap beans and ham, grits, beer bread and fruit cocktail cobbler for supper.

"We try to change the menu a little each year but we try to do southern cooking plus some of our favorites," Stafford said.

Instead of playing one 1860s-era baseball game, the Glendale Gophers and the Bisbee Bees will play a doubleheader. Hall of Famer Ernie Banks, known for saying "Let's Play Two," would be pleased. The first game starts at 11 a.m. The second game starts at 1 p.m.

How much: Park entry fee is $5 per person, $2 ages 7-13; free for ages 6 and younger. Lunch at the Dutch oven cooking demonstration is by donation.