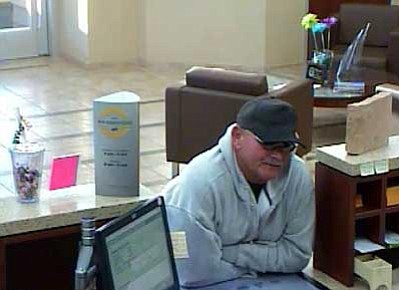 A bank in Chino Valley was robbed Friday by a man matching the description of a person involved in bank robberies in Camp Verde and Cottonwood. This time, police caught a break and possibly an identity.

The call came into Chino Valley Police at around 5:50 p.m. from the National Bank of Arizona. In this case, the bank employees were able to offer not only a description of the man but also of his vehicle.

Soon after, a DPS officer spotted the vehicle traveling south on 89 toward Prescott. The officer pursued, at speeds reaching 75 mph, until the driver entered a populated area near Willow Creek Road.

After getting the license plate number, the officer terminated the chase. The vehicle is described as a gold 2002 Chevy Trailblazer with an Arizona license plate of ABD-9409.

The vehicle is registered to a woman in Kingman. Officers there spoke to her and were told her ex-boyfriend had kept the vehicle since the end of their relationship in October 2013.

That boyfriend is identified as Kevin Lee Campbell, 53. He was reportedly released from the Department of Corrections in 2012 after a sentence for robbery and burglary among other charges. He is described as a white man, 5-foot-10, with gray hair and green eyes.

Earlier this month, Chase Bank in Camp Verde and the Bank of America in Cottonwood were robbed. In both cases, the man was described as being in his 50s with gray hair, and bank photos of the suspect were similar.