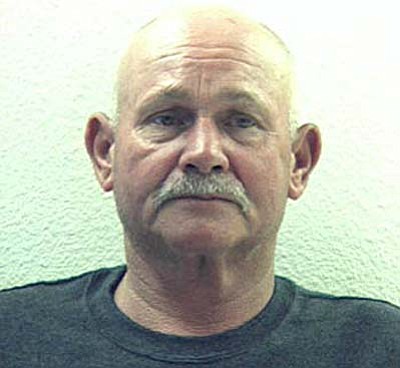 YAVAPAI COUNTY -- The bank robber who is alleged to have held up banks in Cottonwood, Camp Verde and Chino Valley, reportedly is also on tap for a bank hold-up near Kingman as well.

Detectives from both Camp Verde and Cottonwood assisted with the investigation. Tod Moore of Cottonwood said, "My detective conducted an interview with him Saturday and he admitted to robbing the bank here as well as the one in Camp Verde, giving specific details of each robbery."

In all cases, Campbell is said to have worn gloves, often a hood and does not display a weapon, even though he is reported to have kept his hand in his pockets.

After the Friday robbery, police were able to recover most but not all of the money taken from the Chino bank.

Following the Chino Valley bank robbery late Friday, employees were able to get the license plate number of the vehicle he was driving. A DPS officer initiated a pursuit when he spotted the car southbound between Chino Valley and Prescott.

The officer terminated the chase near Willow Creek in Prescott to avoid a hazard in the busy corridor, but the description of the tan and gold Chevy Trailblazer was dispatched to area agencies. The vehicle was registered to Campbell's former girlfriend.

The Yavapai County Sheriff's Office began a search the suspect vehicle near Campbell's home in Cordes Junction. It was found by the bus barn in Mayer about 4 p.m. Saturday.

Campbell himself was found in an unused travel trailer in Cordes Lakes on property that was not his. The property owners were unaware that Campbell was hiding inside.

The Department of Corrections shows that Campbell was released from prison in January 2012 after serving a stint for robbery, aggravated assault and forgery in Mohave County.