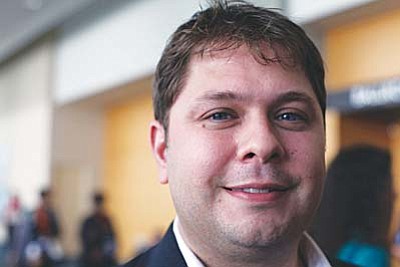 State Rep. Ruben Gallego, D-Phoenix, said millions of people like Tucson resident Sue Voelker had difficulties getting health insurance because of pre-existing condition but that Obamacare is changing that. (Cronkite News Service photo by Nathasha Khan)

WASHINGTON - Laid off and with a pre-existing medical condition, Tucson resident Sue Voelker said it was a struggle to get health insurance - until the passage of the Affordable Care Act.

Voelker, on a conference call Tuesday with state Democrats and a White House official, said that under "Obamacare" she was able to sign up for a Gold Plan policy at the same price as lesser coverage that had previously been offered to her, and that it has not limited her on the doctors she can see.

"I have a lot of doctors," said Voelker, an information technology consultant who suffers from Marfan's syndrome. "It's the same group (of doctors) I have been going through."

Voelker's success in getting registered in a red state like Arizona was held out by the Democrats as an emblem of the progress made under Obamacare at the end of 2013. Voelker was joined on the call by state Sen. Anna Tovar, D-Tolleson, state Rep. Ruben Gallego, D-Phoenix, and David Simas, a deputy advisor at the White House.

But where Democrats saw gains, at least one Republican congressman from the state said the numbers were nothing to brag about.

"Arizona's population is more than 6.5 million, yet a measly 28,000 Arizonans purchased health care plans on the exchange" since it began in October, said Rep. Paul Gosar,R-Prescott in an emailed statement.

The statement noted that 36 percent of the Arizona enrollees are between 55 and 64 years old, and that the program needs more younger people to keep health insurance premiums from rising further. Gosar pointed to a Prescott woman who testified to a House committee that her monthly premiums rose $800 under the act, which she feared might force the family to sell its home and cars to make ends meet.

"This law us a complete disaster, which must be repealed and replaced with a free-market, patient-centered alternative," Gosar said in his statement.

Simas conceded that just one in three Arizonans enrolled so far is under age 35. But he said a strategy of "constant outreach, repetition and engagement" has started to bear fruit, noting that there have now been 11 million phone calls and 53 million visits to the health care website.

Simas also pointed to efforts to boost youth enrollment in the program by getting as many athletes and celebrities as possible to endorse enrollment. He said Feb. 15 has been designated National Youth Enrollment day in hopes of gaining massive sign-ups.

Tovar, a cancer survivor, said she was elated to be in Washington for the passage of the health care act, saying it could give all Arizonans the opportunity for health care that she had.

Gallego also emphasized that before the passage of the ACA nearly 129 million Americans had their health care coverage threatened due to a pre-existing condition - people like Voelker and her Marfan's, a genetic disorder that affects connective tissue. The act has changed that, Simas said.

"Every person in Arizona who wants coverage will be able to sign up for that coverage," he said. "It is not about Democrats or Republicans. 'It is not about the Washington debates. 'It is about making sure everyone in Arizona gets affordable care."