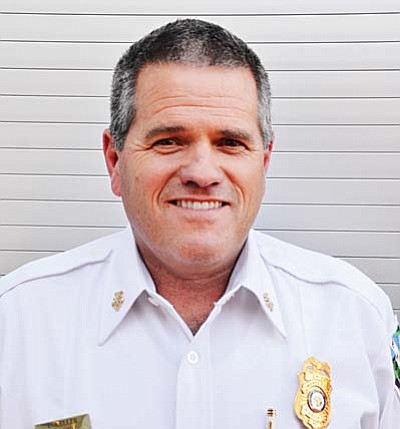 But Keller will not be leaving his job with Montezuma-Rimrock Fire District. Not exactly.

At its Jan. 23 public meeting, CVFD board approved the language for an intergovernmental agreement with MRFD for shared fire chief services. At press time, CVFD board was preparing to hold a special meeting on Jan. 28 to vote to accept and sign the IGA.

Chief Keller spent 24 years with the Sedona Fire District before becoming MRFD chief a little more than a year ago. Though he would effectively be fire chief at both fire districts, Keller will be an employee of CVFD. Keller said he is "excited" about working with both agencies.

"It opens up the possibility of many different opportunities," Keller said. "The key for success with this approach will be patience on the part of everyone, both internally within both organizations, as well as within both communities. The goal is to continue to seek opportunities for exploring enhanced efficiencies by seeking other options for shared services or enhanced efficiencies within each organization in order to either expand the delivery of service, or reduce costs and overhead, which will hopefully translate eventually into lower taxes with better service."

Keller also said that he would respond to major incidents for both agencies and serve as the figurehead for both.

"In a way, the approach may be like a contractor who has two large projects to manage," Keller said. "Each may require more attention at various points, and delegation with oversight will be required to help spread out the work load, but will also serve as a vehicle to develop the skills of the staff of both districts."

Keller's annual salary with CVFD will be $90,000, Darby said. As long as the IGA with MRFD is in effect, Keller will receive an additional $10,000. These figures do not reflect benefits and additional costs related to the chief's employment, Darby also said. The projected annual cost for the chief is $162,600.

"A great deal of hard work, thought, negotiation, and research" has gone into the process, Darby said. "It is a tribute to the many hard working department staff members and board members from both districts that care a great deal about their communities."

At the Jan. 22 MRFD public meeting, the board unanimously voted to approve the district's part of the IGA. Discussions leading up to the vote were "positive," said MRFD board member Carol Keeton.

"There is a large cost savings for both districts. I think it will be a really good thing for both districts," Keeton said. "We are separate but together. We have been doing other shared services like our volunteer firemen already."

Darby agreed that shared services are not a new concept.

"Departments around the country are struggling to provide the same level of service in light of diminishing revenues," Darby said. "Many departments are currently using some form of shared services or are at least considering it. This is an effective way to reduce costs without duplication of positions, providing an opportunity for improved service for the same or less costs. I am confident that Chief Keller will be able to effectively provide leadership to both communities."