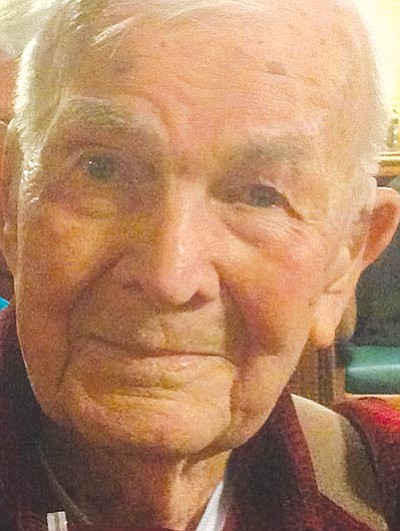 George Leslie Lee, Jr., of Camp Verde, passed peacefully, attended by family, on Saturday, January 25th. Mr. Lee was 96-years-old and lived independently until the day before he died. A visitation will be held from 9am - 11am on Saturday, February 1st at Bueler Funeral Home in Camp Verde. Graveside services will follow at 11:30am and will be held at Clear Creek Cemetery on Old School House Road in Camp Verde.

Mr. Lee and his wife, Ruby Marguerite Wilson-Lee, now deceased, moved to Camp Verde in 1970. Mr. Lee was a surveyor and party crew chief with the State Highway Department, and worked on highways and bridges around Arizona. He was also a fine woodworker and sold his woodwork through Nellie Bly Gallery in Jerome. He was a U.S. Marine during WWII, and fought in the battles of Guadalcanal. He is survived by a sister, Sarah L. Forkum, of Cookeville, Tennessee, his three children, Patsy Ruth Lee, of Glendale, Arizona, Daniel Allen Lee, of Prescott, and Joan Marguerite Lee, of Reno, Nevada. He is survived also by two grandsons, two granddaughters, and four great-grandsons.

A left-handed man born on the Tennessee River, Mr. Lee was a fur trapper and fisherman in his youth. The grandson of a master carpenter and son of an stove smith, he mastered most trades, from concrete to framing to electrical and plumbing. He was a maker of fine furniture, and could rebuild an engine or transmission. If he needed a tool he didn't have he could make it. With the girls he was generous with his hugs, and they lined up when the old man came in, to give him a hug. He was well loved and will be missed.

Please share your condolences with the family at www.buelerfuneralhome.com