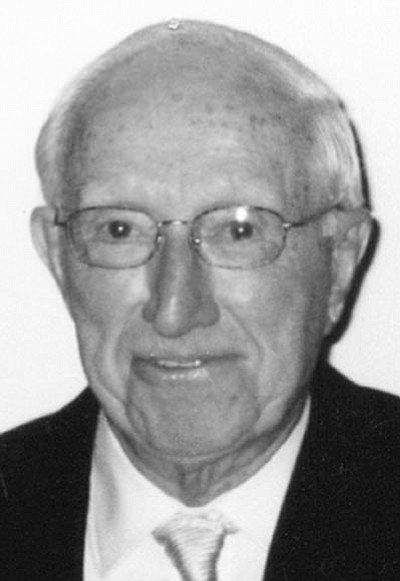 Roy K. Morehead, 91 of Cottonwood, AZ and formerly of Maquoketa, Iowa died on January 24, 2014 in Cottonwood. Funeral services will be held at a later date at Carson & Son Funeral Home in Maquoketa. Burial will be in the Mount Hope Cemetery in Maquoketa. Mr. Morehead was born on April 18, 1922 in Jackson County to Howard and Frances (Sutton) Morehead. He married Eleanor L. (Sal) Penrose on September 6, 1942. Eleanor died February 3, 1987. He served honorably in the US Navy during World War II from October 1942 to December 1945. Upon honorable discharge he joined his father-in-law in the True-Value Hardware store in Maquoketa, which he managed until his retirement in 1986. Mr. Morehead was active in local civic affairs, including: Chamber of Commerce (past president), Maquoketa Country Club, Lions Club and Jackson County Humane Society. Mr. Morehead enjoyed golf, horseback riding, traveling, reading and was a pro at home repair. In addition to his wife, he was preceded in death by four brothers, three sisters and a grandchild. He is survived by two daughters Keleen (Mrs. Jim) Johnson of Franklin, TN and Lovelyn (Mrs. Phil) Rasmussen of Wenatchee, WA, and one sister Faye Bowman of Colorado; 7 grandchildren, 10 great-grandchildren and one great-great-grandchild. Roy leaves a very special, long time companion, Barbara Etting of Cottonwood, AZ. In lieu of flowers, donations may be made to the Verde Valley Humane Society Adopt for Life Center P.O. Box 1429 - 1520 W. Mingus Ave. Cottonwood, AZ 86326 US An online guestbook is available to sign at www.westcottfuneralhome.com - See more at: http://www.westcottfuneralhome.com/obituary/Roy-Morehead/Cottonwood-AZ/-335592#sthash.8HV3m1tF.dpuf