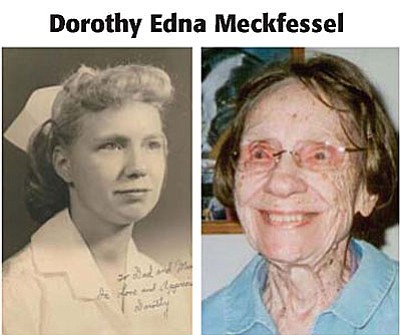 Dorothy Edna Meckfessel received a three-year registered nurse's diploma from the Evangelical Deaconess Hospital School of Nursing in St. Louis, Missouri on Sept. 7, 1950. She was accepted and attended the University of Missouri Medical School in 1956, a feat unheard of for a female in the 1950s.

Dorothy Edna Meckfessel of Cottonwood was born in St. Louis, Missouri, on Dec. 14, 1926, to Frederick and Pauline nee Schroeder Meckfessel. The name Meckfessel was derived from Meckvessel in the state of Mecklenberg in Germany, located in former Prussia. Dorothy passed away peacefully on Tuesday, Jan. 14, 2014, with her friend of 22 years, Diane Joens, holding her hand. She attained the age of 87 years and one month. Caring friends in Cottonwood who also helped Dorothy along the way were Vickie Tillemans and Randy Keenan.

Dorothy received a three-year registered nurse's diploma from the Evangelical Deaconess Hospital School of Nursing in St. Louis, Missouri on Sept. 7, 1950. She was accepted and attended the University of Missouri Medical School in 1956, a feat unheard of for a female in the 1950s. Although she did not become a doctor, in 1957 she earned a bachelor's degree in liberal arts from the University of Missouri, aided by all the pre-med and medical school classes she had completed. In 1964 Dorothy courageously traveled alone to India, volunteering for six months at the Frances Newton Hospital in Ferozepore, India. This interesting journey is described in her autobiography, The Fascinating Life of an Ordinary Person. In 1970 she returned to India via a sightseeing tour sponsored by Overseas Families and Friends and was richly blessed by the people of India. Dorothy was also the author of Your Via Dolorosa (Latin for "way of sorrow") and Victory.

From 1982 until retirement in 1989, she worked as a staff nurse in nursing homes in Phoenix, Sun City and Sedona. Dorothy had a special place in her heart for people living in nursing homes and was an advocate for excellent resident and medical care. When she attended an annual National Citizens' Coalition for Nursing Home Reform in Arlington, Virginia, she met Martha Mohler, a knowledgeable and dedicated advocate for improving conditions in the nation's nursing homes. Martha was Senior Policy Advisor for the National Committee to Preserve Social Security and Medicare in Washington, D.C. They remained good friends throughout the years.

Requesting no services, Dorothy instead planned an informal open house in her home where her written material will be available to anyone who is interested, and the song The Impossible Dream will be played. The open house will be held on Saturday, Feb. 8 from 2 to 3:30 p.m. at 3400 East Godard Road, Apt. 75A. Parking is located at Godard Hall.

Dorothy was preceded in death by her parents and siblings Fred, Don and Harriet Meckfessel. She is survived by several nieces and nephews, most of whom live in Missouri and Kansas. Special cards of condolence may be sent to Dorothy's lifelong friends, Bill and Mary Lou Scott of Florissant, MO; goddaughter Pamela and Steve Berra of Crestwood, MO; Nancy Czyzewski of Webster Groves, MO; Martha Mohler of Chevy Chase, MD; Dr. Devin Mikles of Sedona; Dr. Kenneth Bescak of Cottonwood, and Diane Joens of Cottonwood. Cards sent to 312 West Mesquite Drive, Cottonwood, AZ 86326, will be forwarded.

Always the educator, Dorothy donated her body to the University of Arizona College of Medicine. Friends were important to Dorothy, who never married. She wrote "My love will live on in the wonderful friends who supported and loved me."

Researched and written by Diane Joens