Medical marijuana to be allowed for post-traumatic stress disorder 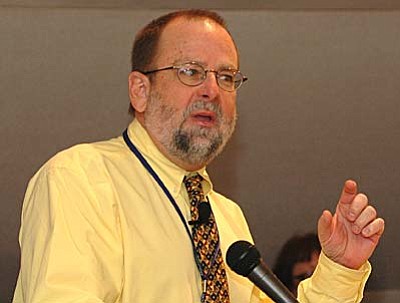 State Health Director Will Humble listens to testimony during a 2012 hearing to determine whether to allow marijuana to be recommended to patients with PTSD. He subsequently concluded there was not enough scientific research to make the change. (Capitol Media Services photo by Howard Fischer)

PHOENIX -- Thousands of Arizona veterans and others suffering from post-traumatic stress disorder will soon be able to obtain marijuana legally.

State Health Director Will Humble decided today there is at least one study showing the drug can be helpful in treating the symptoms of PTSD. He said that, combined with some anecdotal evidence, provides what he needs under Arizona law to allow doctor with a qualifying patient to recommend the drug.

But Humble said he is not approving the drug for use in actually treating PTSD itself, saying no evidence exists that marijuana is effective in that way.

Humble placed one other limit on doctors: Before they can recommend marijuana to deal with PTSD symptoms, they must first attest that the patient has been undergoing more conventional treatments. That would require doctors to first try something else rather than simply using marijuana as the first choice.

The ruling comes after he twice rejected petitions to expand legal use of the drug.

In both cases, the health director concluded he needed peer-reviewed scientific studies to show any beneficial link between marijuana and PTSD. And Humble pointed out that a study he commission by the College of Public Health at the University of Arizona found only "observational studies of varying quality,' with the conclusion that "the totality of this evidence should be considered very low quality with a high degree of uncertainty.'

That last rejection resulted in an appeal by the Arizona Cannabis Nurses Association. And last month Thomas Shedden, a state administrative law judge, said Humble should grant their request.

Shedded conceded that lack of those scientific studies. But the judge said the health chief should also have considered the testimony of doctors and nurses who said the drug has helped their patients.

But Humble also said that proponents presented evidence to Shedden of a manuscript -- not yet published at the time -- which found "an association between cannabis used and PTSD symptoms in some patients.

"In other words, the information presented by the petitioners at the hearing and subsequently published study provided evidence that marijuana may be helpful in the palliative care of PTSD in some patients,' Humble wrote. And that, he said, was enough to meet the requirements of the law which require some substantiation between marijuana and helping patients deal with their symptoms.

The 2010 voter-approved Arizona Medical Marijuana Act allows the use of the drug by patients suffering from a list of several specified medical conditions. These range from glaucoma and AIDS to any chronic or debilitating condition that leads to severe and chronic plan.

So far close to 50,000 people have qualified under the existing list of conditions to purchase up to 2 1/2 ounces of marijuana every two weeks.

But the law also requires Humble to consider requests for expanding the list of conditions for which marijuana can be recommended.

Proponents of adding PTSD to that list tried in 2012 and again last year. That led Humble to contract with the UA to review peer-reviewed studies to determine whether there is any basis for that addition.

Shedden said he reads the health department's own rules to say that decision should not be based solely on scientific studies.

He said the rules also require consideration of other evidence that marijuana will treat a medical condition or at least its symptoms. And Shedden said there was "substantial evidence' that the drug alleviates the symptoms of PTSD -- even if that evidence came from doctors and patients citing their own experiences.