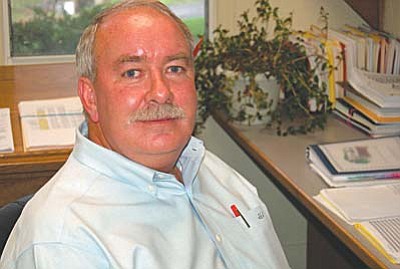 PRESCOTT - The Yavapai County Board of Supervisors reviewed some of the home construction changes Wednesday that would come with updated building codes.

Most of the discussion centered on safety measures and soil testing.

The draft new safety requirements in the newer 2012 International Building Codes include arc fault circuit interrupters, tamper resistant electrical outlet receptacles only if they're within reach of children, carbon monoxide alarms outside each sleeping room, and inspections for water heater replacements.

The most expensive potential change that the board reviewed was the requirement for soil testing when inspectors believe the soils could be expansive. However, this item also would potentially save thousands of dollars for people who live in clay soil areas.

"We're seeing more and more problems," Yavapai County Chief Building Official Jack Judd told the supervisors during their Wednesday meeting in Prescott with their planning commission that recommended the changes.

He estimated a basic soils test would cost $200-$400 and if expansive soils were found, a more complete bore hole test costing $1,200-$1,000 would be required. The county has no soil maps.

The Yavapai County Contractors Association discussed the code changes with county officials on Thursday. Although members voiced support for the soils testing, some believed the basic test could cost more like $3,000-$4,000 since the county wants the soils tester to take the samples on site, YCCA Director Sandy Griffis said.

The code should define the basic soils test, she said.

Retired electrician Larry Meads told a personal horror story about buying a San Antonio home with a hairline crack in the garage floor. It cost him $12,000 to jack up the slab and he felt lucky that he caught the problem before interior walls were damaged.

"That's an easy choice" to conduct a soils test, he said.

Rudd said more than one excavator subcontractor has contacted the county with concerns about contractors ignoring expansive soils.

People who see 'free dirt' signs in places like Prescott Valley should be wary of what kind of soil they are getting, Rudd added.

Yavapai County building officials are not recommending that the county require Arc Fault Circuit Interrupters (AFCI) throughout most of the home. Prescott and PV are not planning to require them, either. Right now they all require them only for circuits in bedrooms.

Some supervisors expressed support for the newer AFCI requirements.

Supervisor Chip Davis and others wondered how the county would enforce a code change to require inspections of all replacement water heaters.

"We're just asking people now to become law breakers," he said. "When I work on my house, I want as little government intervention as possible."

Others including Griffis voiced support, telling stories about how even national chains have improperly installed water heaters.

"It is a life safety item," Pluimer said.

The county would charge more than local cities for the inspection, $102.50 versus about $60, because inspectors have to drive much farther. But that cost made some planning commissioners concerned about the new requirement, Commissioner Larry Jacobs said.