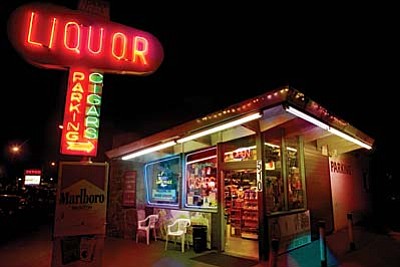 Arizona was tied for the fourth-highest rate of alcohol-related deaths among its working-age population from 2006 to 2010, the CDC said, at 13.4 percent compared to a national rate of 9.8 percent for the period. The state was fifth for the alcohol-related death per 100,000 residents. (Photo by Thomas Hawk via flickr/Creative Commons)

WASHINGTON - Arizona was tied for the fourth-highest rate of alcohol-related deaths among its working-age population from 2006 to 2010, according to a recent Centers for Disease Control and Prevention study.

The June report said 13.4 percent of all deaths to working-age residents were attributable to alcohol for that period, up slightly from 13.1 percent during the five years prior.

The 2006-2010 rate for the state was well above the national average of 9.8 percent for the period, and tied with Wyoming for fourth-worst, behind only New Mexico, Alaska and Colorado.

The same CDC study said Arizona ranked fifth in the nation for the rate of alcohol-related deaths per 100,000 people in the overall population, when the population is adjusted to parallel the nation's age. Only Alaska, Montana, New Mexico and Wyoming had higher overall rates.

The study looked at 54 different alcohol-attributed causes of death, including everything from liver disease to falls and accidents to suicide.

Mandy Stahre, one of the co-authors of the report, cited several possible reasons that one state might perform worse than another, including poverty, alcohol-enforcement policies and religious views toward alcohol.

Stahre, an epidemiologist for the Washington State Department of Health, also said there is a "regionality" to the findings that includes the fact that many troubled states are largely rural.

"When dealing with a state like Arizona or New Mexico, you got some areas that are just very rural," Stahre said. "Access to care can be a huge issue."

Not everyone has a trauma center or hospital nearby to go to after a vehicle crash or serious accident, she said.

But Deni Carise, who has worked in substance-abuse treatment for more than 25 years, said there are no easy answers to why alcohol-related deaths are a problem in Arizona.

Carise is chief clinic advisor for Sierra Tucson, a treatment facility for addiction. She speculates that one possible reason for high numbers of alcohol-related deaths - in Arizona and in other states - is the fact that alcoholics and their families have no voice in their communities.

"When your family member is an addict or an alcoholic it's shameful to admit that," Carise said.

And for people in recovery, she said, being open about their struggles with addiction can cost them their jobs, lessen their likelihood of even getting a job and affect their ability to get life insurance.

While there is no one cause, Carise said, there are "a hundred ways" that alcoholism can affect a community: a drain on health-care resources, an overlap of alcohol addiction and homelessness, and children more likely to end up in foster care, among other effects.

Reducing the amount of alcohol-related deaths and getting help for people with substance-abuse problems is something everyone should care about, she said, because "it affects them."

"When we let people get into an addiction and continue an addiction in their alcoholism, the community loses that way," Carise said.

The Arizona Department of Health Services is working to prevent alcoholism before it even starts, said the department's Cory Nelson, by focusing efforts on the state's youth.

Nelson, the deputy director at the Division of Behavioral Health Services, said the goal is to prevent risks that could lead to excessive drinking and alcohol-related deaths down the road.

"The youth are one of our great targets because of the significant long-term impacts you can have," Nelson said. "Whereas you have a little less time to work with the adult population."

He said alcohol-attributable deaths could be reduced if they were addressed as a public health issue like other chronic illnesses, such as diabetes and heart disease.

For those ailments, he said, there is "anywhere between a 70 percent to an 85 percent treatment or screening rate." But when you look at substance-abuse disorders, "you're looking at about an 18 to 20 percent screening rate," Nelson said.

Despite the problems now, Carise holds out hopes for the future.

"There is more medication being developed, more types of treatments being delivered and more treatment programs opening," said Carise, who also thinks expanded services could come under the Affordable Care Act.

The new benefits will provide "more options for people that are still suffering," she said.

A recent Centers for Disease Control and Prevention study said Arizona tied for fourth-highest rate of alcohol-related deaths from 2006-2010 and was fifth for such deaths per 100,000 in the same period.