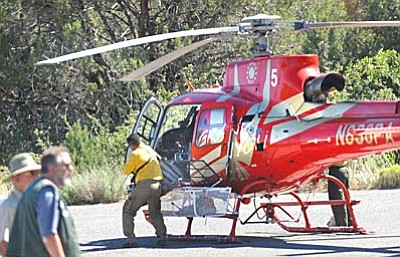 The Yavapai County Sheriff’s Office worked with the DPS Ranger on the removal of the crash victims. Due to the rough terrain, the victims were airlifted to a safe zone pending ground transportation to the Medical Examiner’s Office. VVN/Vyto Starinskas

SEDONA -- Four people were killed in the crash of a small plane northwest of Sedona Sunday, according to the Coconino National Forest. A subsequent wildfire was triggered in the Fay Canyon area that has grown to 25 acres in the Secret Mountain Wilderness as of Monday morning.

The crash was reported by hikers in the Bear Canyon area about 3:40 p.m. Sunday. No names have been released until relatives are notified.

Just after 6 p.m., fire crews on the ground located a downed single engine plane with four fatalities in Fay Canyon, northeast of Bear Mountain. Access to the crash site is currently difficult due to the terrain and fire.

The forest service says the fire is not expected to grow past the area; 30 firefighters are reportedly on the scene.