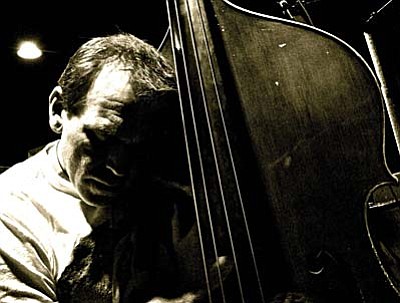 Les Czimber is a long-time and well-known jazz pianist from Southern California who now lives in Prescott.

Prior to his move to Arizona, Czimber was a mainstay in the Los Angeles and Orange County Jazz circuit, playing with innumerable musicians, including Al Jarreau, John Patitucci, Ron Stout, Conte Candoli, Bob Cooper and Joe La Barbera.

Bassist Zirque Bonner, after having completed his degree at California Institute of the Arts, has now returned to Sedona, renewing his presence locally and throughout Arizona as a first-class, powerful bassist and musician.

A student of bassists Rufus Reid and Charlie Haden, Zirque worked extensively in the New York City area, performing with many of the "young gun" jazz artists of that time such as Brad Mehldau, Eric Alexander, Jo Farnsworth and others.

The third of the trio, percussionist Dom Moio has a long and storied musical resumé, which began in the 1970s.

In the 70s, Moio went to the East Coast, studying with studio master Bernard Purdie and playing with Jazz greats the likes of Don Doane, Clark Terry, Dave McKenna and many other players from the New England area.

Moio made Phoenix his home in 1988, and is now well into his second decade at Arizona State University's Jazz Faculty, and is keeping a very busy teaching and gigging schedule.

Sunday's concert is part of the ongoing chamber jazz gatherings at Saint Luke's Church. The parish has been presenting concerts since 2009, and the concerts are one of the consistent highlights of the Sedona Jazz scene.

Admission for Sunday's concert is $12. Tickets are available online and also at the door.

Tickets purchased online will be held at "Will Call" on the day of the concert, and entitles the bearer to be admitted before tickets are sold "at the door" on Sunday.

Saint Luke's Church is the home of SJATC, and is located in the Chapel area of Sedona, on Hwy 179, between the Back O' Beyond and Chapel Road roundabouts.

For more information, telephone the church (928-282-7366) or visit the internet home of Sedona Jazz at the Church, found at www.episcopalnet.org